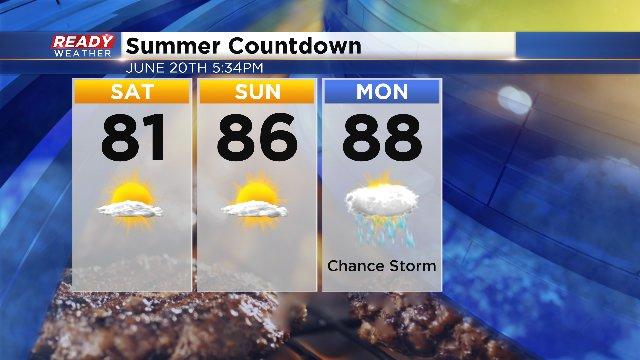 The summer countdown in on! The official start to summer, known as the Summer Solstice, is just three days away and temps are on point.  The forecast calls for temperatures in the 80s this weekend into next week Monday. Check it out:

As we near the longest days of the year, we'll have plenty of sun to soak up this weekend. Then, a cold front will slide through Monday afternoon, which may provide a few hit or miss storms to ring in the summer season. In fact, the best chance for those storms will come right around the official solstice, which will occur at 5:34pm.

This year the solstice falls on the 20th, but can range from the 20th-22nd of June. The word solstice is from the Latin solstitium, from sol (sun) and stitium (to stop) to mark the point that the sun appears to stop at this time. In our area, the Earth's tilt points the northern hemisphere toward the sun.  You'll notice the higher sun angle in the sky. As we get more of a direct hit from the sun's ray, we max out on our heating potential, which gives us our nice warm summer season. And also our longest days of the year. From the graphic above, you can see that we'll get just over fifteen hours and twenty minutes of daylight. The best part is that even once we pass the solstice, days remain long and warm for awhile!  The average high temperature in Milwaukee on the solstice is seventy seven degrees. By July, our average high temp holds steady right at eighty degrees. And that continues into the first week of August, before averages slip back into the 70s. Additionally, our latest sunset actually comes the day after the solstice at 8:35pm, and then stays at 8:35pm through July 1st.