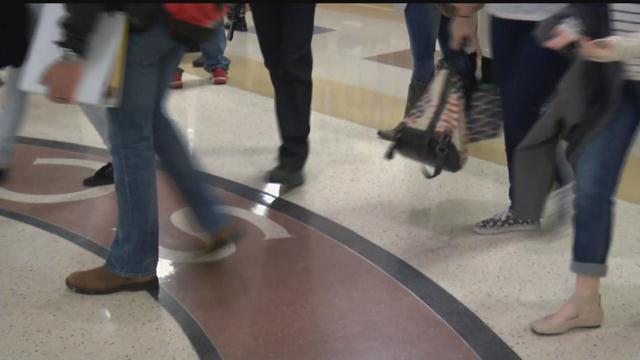 CBS 58-- You trust them to teach your child in a safe setting, but many Wisconsin teachers are being convicted of having sex with their students. When it comes to sentencing, are they being fairly punished?

Since January, five school employees in the Milwaukee, Racine, Waukesha area, have been charged with having inappropriate relationships with students. The allegations include rape, sexting, and having sex in the classroom. They face years in prison, but in Wisconsin, teachers charged with sex crimes don't usually spend a lot of time behind bars.

“When we started hearing what she was saying, it made both my husband and I just sick and we just started to cry,” said one mom, whose daughter was sexually assaulted by a teacher at a Wisconsin high school.

That teacher took a plea deal, and the years in prison he faced turned in to just months in jail.

“For him to get off that easy, she still carries that hurt and the humility,” the mom said.

Kent Lovern, the chief deputy district attorney for Milwaukee County, was not involved in the case, but he says plea deals are a vital part of the justice system.

“The things we have to consider in all of our cases, including cases involving teachers and students, really focus on the serious nature of the offense, the character of the offender and the need to protect the community,” Lovern said.

But do those pleas let teachers off the hook? A USA Today investigation found Wisconsin educators rarely do more than a year in prison for sex crimes.

Michael Burman, a teacher in Fond du Lac, had more than 70 sexual encounters with a student, often in his classroom. He originally faced 20 felonies and 300 years in prison. Ultimately though, he pleaded guilty to just two of the charges and received six months in jail and five years probation.

Christopher Wieber, a teacher in Brown County, was charged with two felonies  but plead guilty to one. He got one year in jail.

Andy Follen, a Clark County teacher, got a similar deal. He was accused of sexually assaulting two teens. He got seven months in jail.

All three men lost their jobs and teaching licenses but do not have to register as sex offenders. The victim's mom says these deals send the wrong message.

“This is just a slap on their hands and it gives other people, 'oh that's not so bad,'” she said.

Lovern says district attorneys do take in to account that teachers are authority figures.

“My experience is that we are well aware of those cases when they come in to the office, they receive a great deal of care and consideration,” Lovern said.

In some cases, teachers do end up on the sex offender registry even if they don't get lengthy prison sentences, including Andrea Ebert and Nathan Cox, both former teachers in Barron County. Both spent a year or less behind bars, but are currently registered sex offenders.

Milwaukee County District Attorney John Chisolm did not handle these cases, but says all sex assault cases are very sensitive crimes and each one is different.

“Those are cases that always require a deep connection with the victim,” Chisolm said. “We base every single decision on the facts of that particular case,”

And the age of the victims makes a difference. Wisconsin laws attach tougher penalties to cases involving kids under 16.  In these cases, many victims were 16 or 17.

“I do not want to see this happen to another girl,” the mom said. “I expect [schools and the justice system] to protect them.”