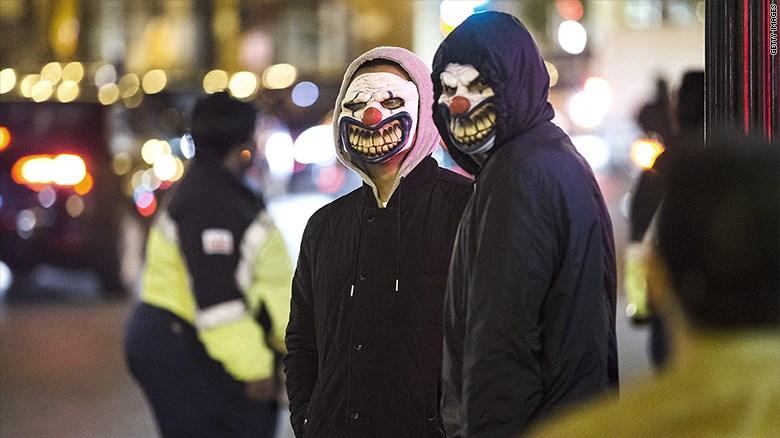 (CNN MONEY) Scary clowns have gotten a little too real for Target.

Two weeks before Halloween, the company is pulling some clown masks off its shelves and out of its online store after sightings of menacing clowns across the country.

Police in Greenville, South Carolina, were alerted this summer to clowns trying to lure childrenfrom an apartment complex into the woods. In Texas and West Virginia, people dressed as clowns were arrested this month for chasing strangers with sticks and baseball bats.

Gunmen in clown masks have reportedly robbed gas stations in Ohio and Kentucky, and robbers in clown masks reportedly hit Taco Bell and Domino's restaurants in Phoenix. On Sunday, a man in Los Angeles County was reportedly arrested for shooting at a clown who brandished a knife.

"Given the current environment," Target (TGT) spokesman Joshua Thomas said, "we have made the decision to remove a variety of clown masks from our assortment, both in stores and online."

Target declined to say which masks it pulled. Some were still available at Target.com on Monday via links to Spirit Halloween.com and HalloweenCostumes.com. For example, Target was selling a "horror clown mask" for $19.99 through Spirit Halloween.

Randy Christensen, president of the World Clown Association, which was founded in 1982 and has an annual convention, took no position on Target's decision. But he drew a distinction between horror as an entertainment genre and something darker.

"We are against any usage of a clown-masked persona to terrorize the general public," he told CNNMoney.