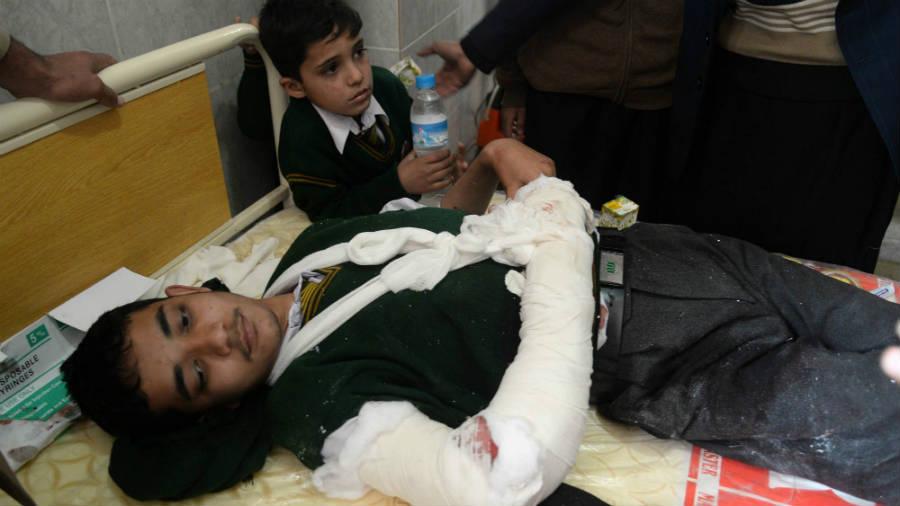 ISLAMABAD, Pakistan (CNN) -- \"'God is great,'\" the Taliban militants exclaimed, as they roared through the hallways of a Peshawar, Pakistan, school.

Then, 14-year-old student Ahmed Faraz recalled, one of them changed the narrative.

The death toll does not include the attackers who Pakistani Taliban spokesman Mohammed Khurrassani said scaled the school's walls around 10 a.m. (midnight ET), intent on killing older students there.

These Taliban had \"300 to 400 people ... under their custody\" at one point, said Khurrassani, whose group is called Tehreek e Taliban Pakistan.

They were eventually met by Pakistani troops who pushed through the complex building by building, room by room. By 4 p.m., they'd confined the attackers to four buildings. A few hours later, all the militants -- seven of them, according to Bajwa -- were dead.

Still, the ordeal isn't over.

Pakistani authorities spent Tuesday night inside the school in Peshawar, a city about 120 kilometers (75 miles) from the country's capital, Islamabad, looking for survivors, victims and improvised explosive devices planted to worsen the carnage.

The story continues on other fronts as well, such as the military's continued offensive against militants in northwest Pakistan and in Peshawar hospitals where many young people are fighting for their lives.

In a tweet, Bajwa called the attack a \"ghastly act of cowardice in killing innocents\" that, in his view, proves that the Taliban are \"not only enemies of (Pakistan) but enemies of humanity.\"

\"They have hit at the heart of the nation,\" the military spokesman said. \"But ... they can't in any way diminish the will of this great nation.\"

Minister: Most of the dead were 12 to 16 years old

On a typical day, the Army Public School and Degree College is home to about 1,100 students and staff, most of them sons and daughters of army personnel from around Peshawar though others attend as well. The boys and girls attend classes in different buildings on the compound.

They were in the middle of their school day when a car exploded behind the school.

\"The security got their attention diverted (and) somehow they managed (to get) inside,\" Pakistani education minister Muhammad Baligh Ur Rehman told CNN.

Students said gunmen proceeded to walk through where students in grades 8, 9 and 10 have classes and fired out randomly, said Dr. Aamir Bilal of Peshawar's Lady Reading Hospital.

Seventh-grader Mohammad Bilal said he was sitting outside his classroom taking a math test when the gunfire erupted. He fell into bushes before running to the school's gates to safety.

Ahmed, the 14-year-old student, remembered being in the school's auditorium when four or five people burst in through a back door \"and started rapidly firing.\" After getting shot in his left shoulder, the ninth-grader lay under a bench.

\"My shoulder was peeking out of the bench, and somebody was following,\" Ahmed recalled. \"They went into another room, (and when) I ran to the exit, I fell.\"

They found, he said, \"the children ... drenched in blood, with their bodies on top of each other.\"

Most of those killed were between the ages of 12 and 16, said Pervez Khattak, chief minister of Khyber Pakhtunkhwa province, of which Peshawar is the capital

By 8:30 p.m., Lady Reading Hospital had already taken in 31 dead boys, plus the body of one of the attackers, Bilal said. Another 45 came in injured -- some with gunshot wounds all over their bodies, though 20 were discharged within a few hours.

Pakistan has seen plenty of violence, much of it involving militants based in provinces such as South Waziristan, North Waziristan and the Khyber Agency -- all restive regions in northwest Pakistan near Peshawar along its border with Afghanistan.

It is the home base the TTP, an organization that has sought to force its conservative version of Islam in Pakistan. They have battled Pakistani troops and, on a number of occasions, attacked civilians as well.

Peshawar, an ancient city of more than 3 million people tucked right up against the Khyber Pass, has often found itself in the center of it all. Militants repeatedly targeted the city in response to Pakistani military offensives, like a 2009 truck bombing of a popular marketplace frequented by women and children that killed more than 100 people.

And the Taliban hasn't hesitated to go after schoolchildren. Their most notable target is Malala Yousafzai, who was singled out and shot on October 9, 2012. The teenage girl survived and, last week, became the youngest recipient of the Nobel Peace Prize for her efforts to promote education and girls rights in Pakistan and beyond.

Yousafzai said Tuesday she was \"heartbroken by this (latest) senseless and cold blooded act of terror in Peshawar.\"

\"Innocent children in their school have no place in horror such as this,\" the 16-year-old said.

Taliban: Revenge for killing of tribesmen

Still, even by Pakistan and the Taliban's gruesome standards, Tuesday's attack may be the most abominable yet.

This is the deadliest incident inside Pakistan since October 2007, when about 139 Pakistanis died and more than 250 others were wounded in an attack near a procession for exiled former Pakistani Prime Minister Benazir Bhutto, according to the University of Maryland's Global Terrorism Database.

It comes after some signs that peace could be possible. As recently as last spring, the Pakistan Taliban -- a group closely affiliated with the Taliban in Afghanistan and whose members swear allegiance to the Afghan group's leader, Mullah Omar -- and Pakistan's government were involved in talks. The government released 19 Taliban noncombatants in a goodwill gesture, in fact.

But talks broke down under a wave of attacks by the Taliban and mounting political pressure to bring the violence under control.

In September 2013, choir members and children attending Sunday school were among 81 people killed in a suicide bombing at the Protestant All Saints Church of Pakistan. A splinter group of the Pakistan Taliban claimed responsibility for the church attack, blaming the U.S. program of drone strikes in tribal areas of the country.

And for the past few months, the Pakistani military has been conducting a ground offensive to clear out militants, a campaign that's displaced tens of thousands of people and spurred deadly retaliations.

Khurrassani, the Pakistan Taliban spokesman, told CNN that the latest attack was revenge for the killing of hundreds of innocent tribesmen during repeated army operations in provinces including South Waziristan, North Waziristan and the Khyber Agency.

The TTP spokesman challenged that ordinary citizens were targeted, saying that five army vehicles are routinely stationed at the school.

\"We are facing such heavy nights in routine,\" Khurrassani said, rationalizing the siege shortly before it ended. \"Today, you must face the heavy night.\"

British Prime Minister David Cameron called the news \"deeply shocking,\" saying \"it's horrifying that children are being killed simply for going to school.\" He was among a number of officials around the world -- including from the president of India, Pakistan's longtime rival -- who condemned the violence.

\"By targeting students and teachers in this heinous attack,\" U.S. President Barack Obama said, \"terrorists have once again shown their depravity.\"