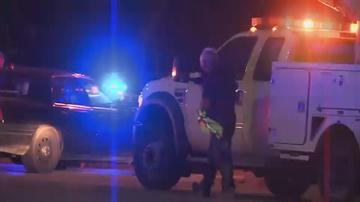 Police said it all started Tuesday night around 8:30 p.m. Muskego Police where trying to complete a drug investigation when the suspect fled police in his car.

The suspect headed northbound on Moorland to I-43. New Berlin police followed the suspect and continued to pursue him eastbound on I-894.

\"We were contacted by the Waukesha County Sheriff's Office that they had been in a pursuit and the vehicle in the pursuit had crashed on the 894 eastbound ramp off of 60th street, which is in Greenfield,\" said Paul Schlecht the assistant police chief.

Two suspects fled on foot from police. One of the suspects  jumped a fence and broke his leg. He also tossed away a gun and bag of marijuana. The second suspect was found in someone's backyard hiding under some branches off of 51st and Armour about an hour later.

\"The cops looked and were shouting in the back corner over here for a man to get up,\" said Jacob Drake.