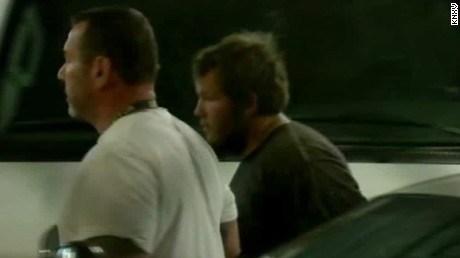 (CNN) A SWAT team arrested a suspect in Phoenix's highway shootings after investigators connected his handgun to four of 11 incidents, authorities said.

The suspect has been "forensically linked" to the first four shootings along Interstate 10 in downtown Phoenix, said Col. Frank Milstead, director of the Arizona Department of Public Safety.

"The weapon and the man we believe to be responsible for what started this spree in Arizona is in custody," Milstead said.

Authorities got a break in the case after a 9 mm handgun was pawned, City Councilman Sal DiCiccio said.

The pawnshop's owner alerted authorities after he realized it was the same type used in the highway shootings.

Leslie Allen Merritt Jr., 21, was arrested while shopping in Glendale, a Phoenix suburb, according to Daniel Scarpinato, a spokesman for Arizona Gov. Doug Ducey.

Though the governor's office named the suspect, Milstead and other authorities declined to identify him. Police took him into custody Friday night.

The weapon has been connected to the August 29 and 31 shootings on I-10, Milstead said.

He declined to provide additional details, saying the investigation is in its preliminary stages. It's unclear whether the suspect is connected to the other seven shootings.

"Are there others out there? Are there copycats? That is possible," Milstead said. "We will continue to investigate."

The suspect's father, Leslie Merritt Sr., defended him, telling CNN affiliate KNXV-TV that anyone who believes his son is the shooter is " a moron."

Phoenix residents were on edge over the random gunfire in and around I-10 between August 29 and September 10. In addition to the shootings, authorities said there were "numerous reports" of damaged cars.

The first round of gunfire hit an SUV, an empty tour bus and a passenger car last month. More shootings followed, with the latest reported September 10.

State officials expressed relief at the arrest, but they said the investigation is ongoing.

"We got him!," the governor tweeted after the arrest.

He urged residents to stay alert and call authorities if they have any information related to the shootings.

The spate of shootings in Phoenix spawned copycats on roadways elsewhere in the city -- presumably by someone trying to emulate the downtown incidents.

State officials described the shootings as "domestic terrorism" and offered a $20,000 reward for information leading to an arrest.

There have been no fatalities linked to the shootings. A girl, 13, was wounded when a bullet pierced the windshield of the SUV she was in -- the only injury linked to the highway shootings.

In a case described as unrelated to the shootings, police arrested three people for allegedly firing rocks with a slingshot at pedestrians and cars.