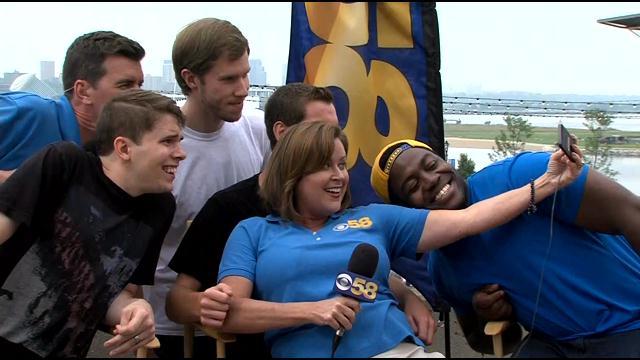 The Indiana native was in Los Angeles for less than two days and had already taken sixty selfies.

“You just want to document everything that you’re doing and send it out to everyone so they can see it,” she said.

Keyler is not alone. Selfie mania is everywhere, whether you’re an A-list celebrity or just feel like one.

A new selfie study from the University of California, Irvine, says taking more smiling selfies increases your chances of happiness.

Forty-one students spent four weeks taking selfies and then reporting their moods. Over time, they noticed an obvious change. They were happier and more confident, and that mood lasted the entire day, even when they fake smiled.

“You can engage in the act of being happy,” said University of Southern California associate professor Mark Marino.Marino incorporates selfies in one of his writing classes.

“This kind of self-reflection helps people identify both features, both who they want to see themselves as and who they are communicating themselves to be,” Marino said.

But psychologist and UCLA associate professor Yalda Uhls warns too many selfies could be too much of a good thing.

“When we grew up, we took pictures of other people, of places, we reflected out instead of reflecting in,” she said.

So whether you take your selfies with a stick or the old-fashioned way, the key is self-control.