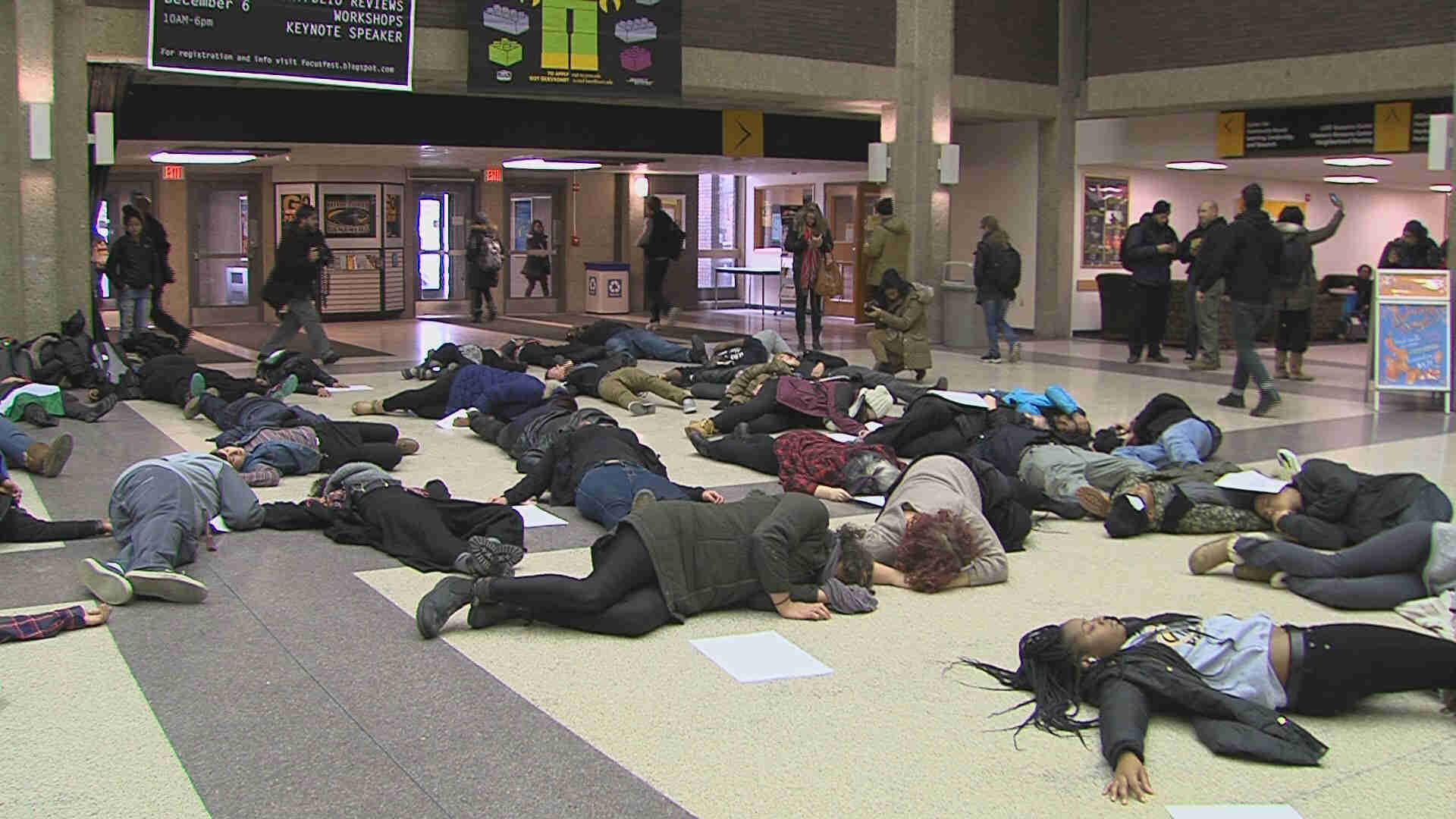 Students gathered at the UW Milwaukee Student Union building Tuesday afternoon to take a stand against the decision not to indict a Ferguson Police Officer for the fatal shooting of an unarmed black teenager.

Milwaukee County Supervisor David Bowen attended the rally and spoke in support of the positive approach the students took to get their message across.

Instead of screaming or yelling, the students held up signs representing national and local victims of officer involved shootings, among them Dontre Hamilton.

A decision on charges in his April killing during a struggle with former Milwaukee Police Officer Christopher Manney has still not been announced.

At one point the students lay on the floor, symbolic of what many see as the disrespectful treatment of victims' remains at officer involved shooting scenes.

This was an especially tension filled issue in Ferguson, where residents became agitated with the sight of 18 year old Mike Brown's body on the pavement for several hours.

The most passionate moments came when students themselves got up to speak. They recalled how as a minority they were always warned by their parents about the suspicion they would meet when encountering law enforcement.

The assumption that blacks in particular are guilty until proven innocent a common theme among those who spoke.

\"We shouldn't have to act a certain way if a cop pulls us over,\" lamented a young woman who moved to the center of the group. \"That is not acceptable, it shouldn't be the norm.\"

Her voice trailed off as she neared tears, the frustration was clear as she was met with applause.

\"Our hearts go out to the Brown family and to the people of Ferguson. Last night's announcement of the grand jury's choice not to charge Darren Wilson, a Ferguson police officer, with the death of Mike Brown was a major blow to our hope for justice, and to the similar hopes of millions of Americans. Although the verdict may not have been what many wanted, there is much to be learned from the lesson of Ferguson, and as we watch the unrest, we should also see the hurt and pain.

We know there is hurt and pain because we have learned of the witnesses' accounts who say Mike Brown was mere feet away from Officer Wilson, facing the officer with his hands raised in the air and imploring, “Don't shoot, I'm unarmed.” In Milwaukee we have seen the pain and the hurt in the faces of the family of Dontre Hamilton, the 31-year-old Milwaukee native and resident shot and killed by former Milwaukee Officer Christopher Manney earlier this year in Red Arrow Park. To date there is no decision from the District Attorney in the Dontre Hamilton case, and it's been nearly seven months since Dontre's death.

Watching what is happening in Ferguson, we hope that we are collectively taking notes here in Milwaukee. It has been especially striking to see how much preparation has gone into readying for the verdict in Ferguson and how little has gone into helping the community to heal.

Transparency of process and systemic change are essential in Milwaukee. Throughout any process or investigation all affected parties have to feel heard and that their concerns are being addressed. Long-term, systemic changes are needed, including new laws and better police training, in the hopes of preventing additional incidents like Milwaukee's Dontre Hamilton case.

We believe we need to spend more time thinking about how we can heal in Milwaukee and how we can effectuate meaningful, systematic, systemic change in the wake of the Hamilton case. Ferguson received a grand jury verdict in less than four months; our community has been waiting for a decision for nearly seven months. We hope the District Attorney comes out with the findings in the Hamilton case soon so that Dontre's family can begin healing.\"