Student: I was expelled from Oklahoma school for marrying another woman 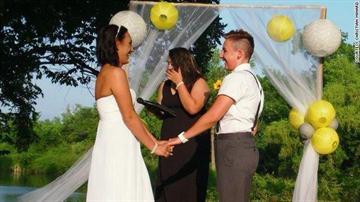 (CNN) -- First there was friendship. Then there was romance. After that there was marriage.

And now, at what would have been a few weeks from her senior year in college, Christian Minard finds herself expelled from school -- because the person she married is another woman.

In a letter from earlier this month that Minard shared with CNN, an administrator at Southwestern Christian University noted that he'd been told of Minard's same-sex marriage and saw pictures of it posted to Facebook.

Such a union is in apparent conflict with the \"lifestyle covenant\" of the university \"that all students must agree and sign,\" he added.

\"As an American and a Christian, I do respect your choice,\" the administrator wrote. \"(But) I have to uphold the Lifestyle Covenant at SCU and confront you with our position.

\"Due to this recent event, you will not be able to attend SCU in the future.\"

When asked to confirm that the school -- which describes itself as part of the \"International Pentecostal Holiness\" denomination -- sent the letter and to elaborate on the decision, the school's provost, Connie Sjoberg, said only that federal law \"prohibits us from confirming if an individual is or has been a student at our institution.\"

Sjoberg added, \"We therefore cannot comment on your specific request.\"

Did Minard sign the school's morality covenant? Yes, she concedes. But she still thinks her expulsion is unfair. Plenty of other students violate the contract in one way or another without being expelled, she says. Minard thinks she is singled out because she's a lesbian.

In addition to the emotional sting, the 22-year-old says she is now stuck personally -- not knowing what to do, or where to go next.

\"I'm trying to figure out how and where I can graduate,\" she told CNN, noting that she'll have to start paying off her loans at the end of next year unless things change. \"... It's going to be hard to get into classes that may be full, because they gave me very little notice before the fall semester starts.\"

Minard came to the school on scholarship for basketball, though her playing career was cut short after doctors told her -- after she'd suffered multiple concussions -- that she should avoid sports with physical contact.

\"I stayed on without a scholarship,\" Minard said, \"because I was so invested in the university and knew that some credits wouldn't transfer to other schools.\"

Meanwhile, her life was changing in other ways as well.

About 3½ years ago, she met her future spouse, Kadyn Park. They started out as friends, and romance blossomed over time. \"We eventually fell in love and decided to get married,\" Minard said.

The couple wed March 17 in Albuquerque, New Mexico -- a state where same-sex marriage is legal.

She had planned to become a strength and conditioning coach. \"Once I graduated,\" Minard said, \"I was willing to go wherever life took me.\"

Her educational and professional path, though, is now far from clear.

Yet Minard feels that she's in the right place in her own spiritual journey.

Having grown up in the Lutheran Church, Minard notes that she \"at first ... struggled\" with the idea that her faith was at odds with her sexuality.

\"I had questions, but I worked through those questions,\" she said. \"And now I have a strong faith in God. And I believe you can still have faith in God and live a gay lifestyle.\"