Student arrested after social media threat to "shoot up the school" 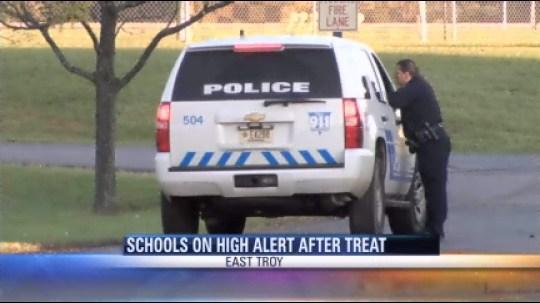 A threat made on social media put the entire Delavan-Darien School District on lock down Friday morning.

Officials said a student was arrested by Delavan police inside the high school.

The student is accused of using their phone to post, \"I'm going to shoot up the school,\" on a social media site called \"Yik Yak\"

Hibner said local police notified the district around 9 p.m. Thursday. After getting more details from authorities around 12:30 a.m. Friday, district officials met hours later at 4 a.m. to determine how to handle the situation.

The district alerted parents about the possible threat in a letter via email before school Friday morning.

It gave parents the option to keep their kids out of school for day. Absences would be excused.

Of the 1,650 students district wide, it is unknown how many stayed home.

But, the lack of cars in the East Troy high school parking lot was evidence enough the many students and parents chose safety.

Larry Pontel is one of those parents. The working dad was forced to take his two young children with him to his contracting job to keep them out of harms way.

Hibner said the increased police presence will remain throughout the day as the investigation continues.

He has this message for the student arrested.

\"I hope they understand the severity of what they stated on social media on Yik Yak and the impact it had on our student learning,\" Hibner said. \"The impact it's had about how kids feel about safety within the school district and community.\"

Students who did not go to school Friday can still participate in evening extracurricular activities. They will go on as planned.

The Delavan-Darien School District lock down was lifted at 9 a.m.

After the arrest, officials there felt it was safe to resume classes for the rest of the day.

The East Troy Police Department is handling the case.