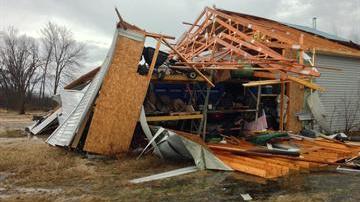 HUSTISFORD --  \"I looked out the window and I said, 'I think we're in a mini- tornado,' Hustisford's Dan Bamke said.

Bamke and his wife were inside their home along Highway 60 when the winds and rain got intense.

Bamke and his wife came out unharmed, but his work shed wasn't so lucky -- the front half was destroyed.

\"My truck, the excavator, everything's in there.  I just put  everything away for deer hunting, so it'd be safe,\" Bamke said.

A utility pole came down in the yard too, knocking out power.  Debris from the shed ended up thrown hundreds of  yards into the woods behind his home, but no one was injured.

\"I turned around, I took off to run down to the basement, my window  blew out, sounded like a stick of dynamite,\" Ziolkowski said.

The storm ripped Ziolkowski's chimney off the roof and destroyed trees in his yard.  He thinks everything was done within 30 seconds.

\"I think we got the worst of it, but we'll make it,\" neighbor Mark Cherry said.

The winds ripped the west side of Cherry's roof off.  But he already was working on repairs Sunday afternoon.