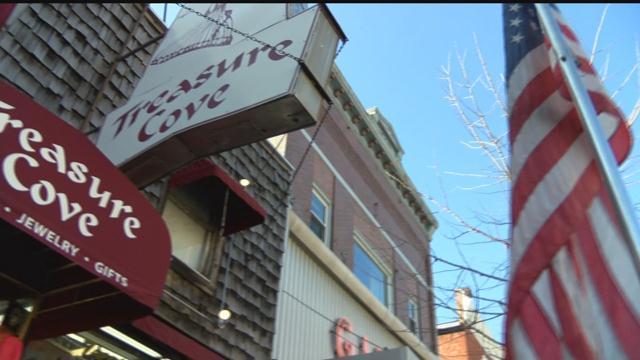 The City of Lake Geneva has decided to allow Joanne Patzfahl to fly her flag outside the Treasure Cove store.

We met personally with Joanne at the Treasure Cove late this afternoon, and reassured her that she was free to return the flag to the original location immediately.

The owner of Treasure Cove in Lake Geneva says she's been told to remove the American flag in front of her store, or face fines from the city.

Joanne Patzfahl received a letter from the city last week, saying her flag was on public property, and violating city code.

She says the flag has been there for 28 years, and sits in a hole specifically placed there by the city.

"We should be able to fly the flag," she says. "You have all the veterans, and everything, people dying for the flag, it just seems weird."

City staff was off Friday, and unavailable for comment.

Patzfahl says tourists frequently take pictures by the flag, which sits between the sidewalk and the road, next to a city-owned bench.

"Nobody's gotten hurt or anything," she says. "I teach the kids that work here how to put it out, and to not let it hit the ground, and when the sun goes down you gotta bring it in."

She says city officials have told her they may able to grandfather the flag in, since it's been there for so long.

Patzfahl says she has no plans to fight the ruling, but will be disappointed if officials don't alter their stance.

"Well, what are you gonna do? I don't want to go against the rules, I just don't like having no flag. The American flag should be flown for everybody you'd think, I think the town would look really cool if everybody had an American flag out there."