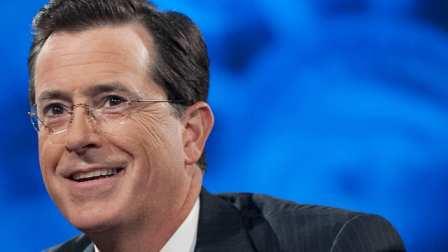 The next host of CBS' The Late Show is stepping out in support of school children.

Comedian Stephen Colbert on Thursday announced that he would donate $800,000 to fulfill grant requests made by South Carolina public school teachers on the crowd funding website DonorsChoose.org.

Colbert announced his donation in a live video stream to an event at an elementary school in Greenville, S.C., and at a conference in New York hosted by DonorsChoose.org.

Ditching his usually tongue-in-cheek conservative persona, Colbert did not mine the event for humor as he has so often in the past. \"I'm so excited to announce we are funding all 1,000 South Carolina projects on DonorsChoose.org today,\" said Colbert. \"DonorsChoose.org makes it so easy to have an impact and connect directly with the teachers and students you're helping.\" Colbert has shown an affinity for the education funding charity for years on his talk show and in person.

Colbert has mostly stayed out of the public eye since signing off from his Comedy Central program in December. He debuts has the next of host of CBS' The Late Show on September 8th. His predecessor, David Letterman will host his final Late Show on May 20th.