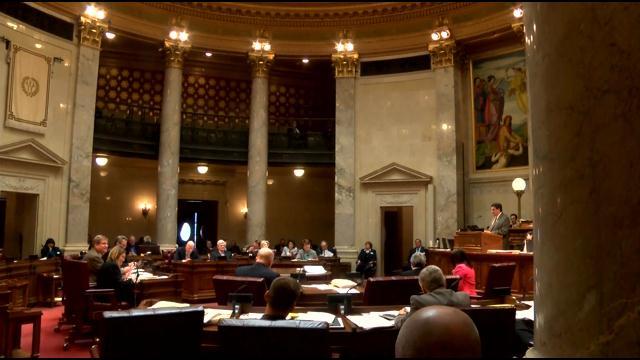 The Wisconsin State Senate is back in session after taking time off for summer.

A few Milwaukee area Republicans now have new titles. That’s what highlighted a Senate session which cruised along without much debate.

Senator Chris Kapenga (R-Delafield) is now officially sworn in as a member of the Wisconsin Senate. He won a special election to replace former senator, and current Waukesha County Executive, Paul Farrow.

Republicans say there will be some issues taken up soon that are already a bit controversial.

Senate Majority Leader Scott Fitzgerald (R-Juneau) said a plan to shake-up the Government Accountability Board will be coming sometime this fall. That’s the state agency which oversees elections. Republicans have charged its leaders with being biased toward Democrats.

Fitzgerald also says the Senate will eventually move on a bill to ban aborted fetal tissue sale and use. That’s a bill the UW-Madison strongly opposes since it uses the tissue for research.

Fitzgerald says he’s not sure what that bill would actually look like when it’s ready for a vote in the Senate. That’s especially since Wisconsin Manufacturers and Commerce, the state’s largest business lobby group, opposes the current form of the bill.

Fitzgerald said, “No one really knew or expected that I think and when they did, certainly I think that’s something that members will take into account.”

Fitzgerald says Senate Republicans will talk about the fetal tissue ban in a caucus meeting Thursday.  He said he will work with the Assembly and Governor Walker’s office on potential changes.