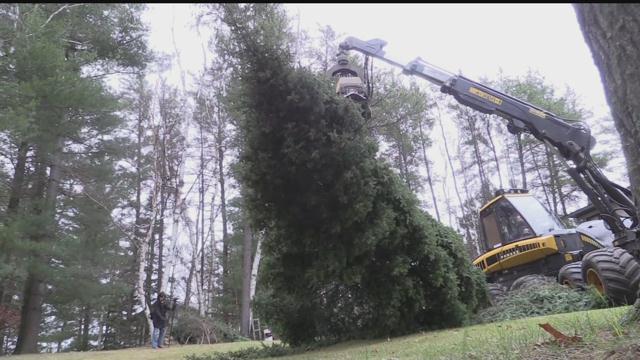 The state Christmas Tree arrived in the Capitol this morning.

But before it got there it grew for thirty years in a Rhinelander backyard. Mary O’Connell reported on how one family watched over it for all that time.

On Arbor Day in 1985, Brad Kowieski planted a tree with his fourth grade class.

"I have three brothers that we would run and play night games, we had countless friends over, dogs, lawnmowers, snowstorms, ice storms, wind storms. Thirty years of them, and that tree grew strong, it stuck through it all," said Kowieski.

Three decades later, that tree in his own backyard would find a new home.

"A couple summers ago, my mom and dad were talking about possibly taking down the tree as it's getting closer to the house, and my mom didn't really want to. So she had an idea that if we could get it to be the state capitol tree, we would donate it," Kowieski said.

Thirty years after it was planted, the tree will serve one last purpose.

The family held a tree cutting ceremony at their house in Rhinelander on Tuesday morning.

Brad's fourth grade teacher Mrs. Guzman said looking back 30 years, she never expected a tree from a small town to have one big impact.

"The DNR used to give our 4th graders seedlings in the spring near Arbor Day, and they were given to the children to take home and plant. I never knew what happened to those, so this is exciting to know that one of them really grew," said Guzman.

Brad's two kids are about the same age he was when he first planted that little seed. and while this piece of brad's life found a new home, he'll plant a new one with his kids to always remember.

"These kids get to go through a really neat experience of seeing something that was done a long time ago provides something now, and this is just a good example and a teaching lesson," said Guzman.