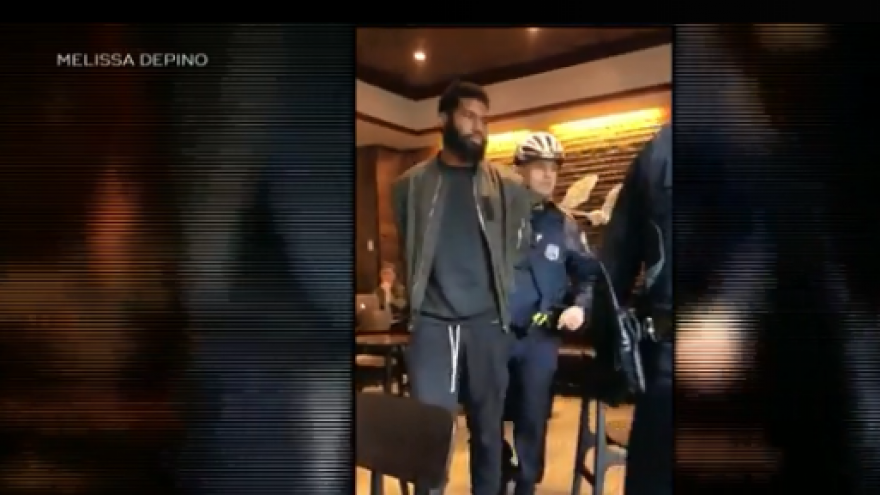 The CEO of Starbucks is in Philadelphia Monday night performing major damage control. The coffee chain is facing protests and boycott threats after two black men were arrested for not making a purchase and refusing to leave the store.

Activists upset over Thursday's incident protested inside the coffee chain Monday morning, and outside in the afternoon -- calling it a clear case of racial profiling

Shared millions of times on social media, the video shows two black men handcuffed and arrested for sitting at Starbucks without buying anything. They claim they were there for a business meeting, and were waiting for someone.

Starbucks says the employee who initially complained to police is no longer "at that store."

CEO Kevin Johnson apologized and traveled to Philadelphia where he plans to meet the two men.

"What happened and the way that incident escalated and the outcome was nothing but reprehensible and I'm sorry," Johnson said.

"None of the white customers were asked to leave, and they were there a lot longer than those young men," said attorney Stewart Cohen, who represents the two men. "Even if the charges get expunged or relieved, it does follow you for the rest of your life."

Starbucks protesters say the coffee chain is "anti-black"
"Starbucks is an example and an indicator of what is happening all across the city of Philadelphia and across the country, frankly" said Philadelphia City Councilwoman Helen Gym.

A video surfaced on Twitter Monday that was shot in January showing police in Los Angeles confronting a black man who was denied access to a Starbucks bathroom after a white man was given the code. Neither had bought anything from the chain.

Before they step forward to speak, the yet-to-be-identified men arrested in Philadelphia want to see change in the way Starbucks handles people like them. In the meantime, police commissioner Richard Ross continues to stand by the actions of his officers.