St. Louis officer under fire for turning off dashcam video during arrest 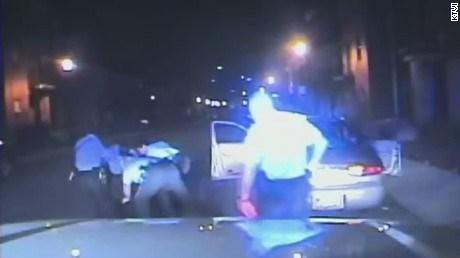 A St. Louis man has filed a lawsuit alleging excessive force in a case that involves an officer turning off a dashcam video of that man's arrest.

At one point in the video, a female officer can be heard saying: \"Hold up, everybody, hold up. We're red right now so if you guys are worried about cameras just wait.\"

The phrase \"we're red right now\" indicates that a camera is recording.

A second dashcam continued to record.

Video of the April arrest shows officers stopping a vehicle being driven by Cortez Bufford, whose car roughly matched the description of one possibly involved in an area shooting.

As officers approached the vehicle, they ordered Bufford and his passenger to show their hands. They did.

According to the police report, one officer smelled marijuana and saw what looked to be plastic baggies full of a leafy green substance.

The passenger was ordered from the vehicle, and he was handcuffed without incident.

Bufford was also ordered to exit the vehicle, but he refused and became increasingly agitated, according to the report. He was then removed.

While officers attempted to place him in handcuffs, one saw the handle of a handgun sticking out of Bufford's right front pocket. According to the report, Bufford was seen reaching for the weapon.

The video then shows officers kicking Bufford while he is on the ground. According to his suit, Bufford suffered abrasions to his fingers, face, back, head, ears and neck. He was handcuffed after an officer used a Taser on him.

A fully loaded handgun was later removed from Bufford's pocket.

An attorney representing the city and the Police Department defended the officers' actions in the arrest, while condemning the officer who turned off the dashcam, which is against department policy.

\"The officers were not acting out of line at any time during the arrest. The person involved in this altercation had a semi-automatic gun, and the officers were protecting themselves and the public. They did what had to be done to protect themselves,\" Winston Calvert told CNN.

He said the use of force and the dashcam issues are separate. The officer who shut off the dashcam video was referred to an internal affairs department, Calvert said.

\"The city's Police Department has a policy on the use of dash cameras and other cameras, and the Police Department special order says the cameras should be left on until the event the concluded. When we saw that an officer had violated that policy, it was very disappointing,\" he said. \"The internal affairs recommended discipline for the officer, which is what happened.\"

Because the case is still open to appeal, Calvert declined to say what the punishment was. He said the officer remains on the job while her appeal is underway. A call to the officer's lawyer was not returned.

Attorney Joel Schwartz, who represents Bufford, is urging reform. All of the charges against his client have been dismissed. It wasn't immediately clear why.

\"I don't think an officer on the scene should have the capability to stop the camera from rolling. Otherwise it defeats the entire purpose of having body cameras and or dashcams,\" Schwartz said.