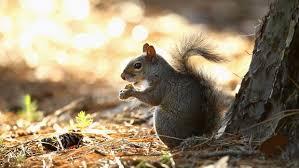 A 911 caller told dispatchers that the squirrel had gotten into the building and was jumping on people, biting them and scratching them. The caller said at least three people were bitten.

During the more than three-minute call, the animal was eventually tossed outside. An ambulance arrived to treat those who were injured.

No one has contacted the state health department with symptoms of rabies, WKMG-TV reports. The three victims refused medical attention at the scene.

The health department said it would have an animal bite expert follow up at the facility on Friday.

It’s unclear if the squirrel was captured.