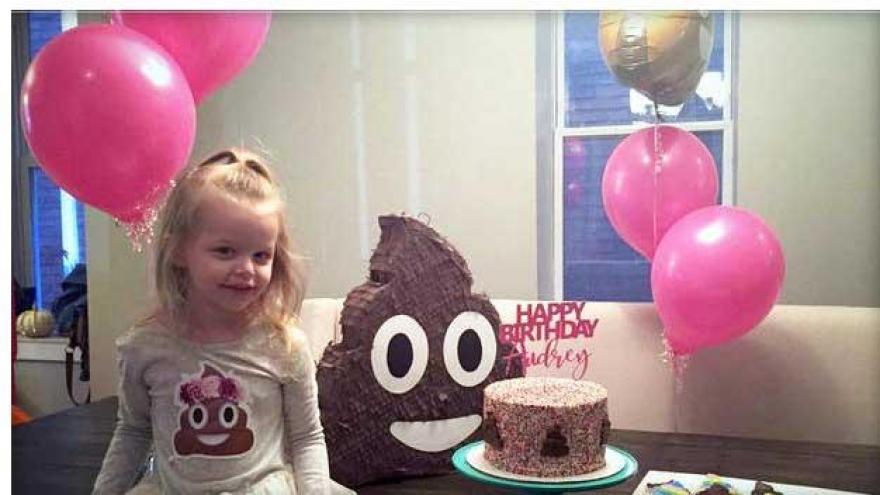 (CBS NEWS) This Missouri native may only be three, but she is already quite the character. And now, little Audrey is capturing the national spotlight for her unique choice of a birthday party theme: poop.

“For months, any time we would talk about her party, she said she wanted ‘poop balloons and poop cake,’” Audrey’s mother, Rebecca, tells CBS News.

Audrey’s parents tried suggesting a princess theme. They tried suggesting Daniel Tiger, which is the little girl’s favorite TV show. But every time they brought it up, little Audrey was unflinching in her resolve for the theme she wanted.

“We tried to suggest other ideas, but every time we asked it was always poop,” Rebecca recalls.

So, after much consideration, she and her husband decided to just roll with it. They went out and bought poop balloons and a poop piñata filled with tootsie rolls and Hershey’s kisses. They even purchased whoopie cushions to hand out as party favors.

“I thought that the grandparents might question it,” Rebecca said, “but they were totally on board. All of our family and friends were. It makes me grateful that we’re surrounded by such supportive people.”

And most importantly, Audrey loved it.

“It was Audrey’s party, so we wanted it to be something that she would love,” Rebecca explained. “I love that we’ll look back at pictures and it will represent our quirky girl at three.”

The internet, it seems, loves it too. As with any story that gains traction on social media, there are of course the naysayers. However, countless people worldwide are applauding Audrey’s unabashed originality, a trait Rebecca says her daughter exhibits in other facets of life as well. This weekend, for example, Audrey had her first gymnastic performance and was reportedly falling off the balance beam for comedic effect.

“I just love how confident she is. She’s just always herself,” Rebecca says. “When she’s older she’ll have plenty of people trying to tell her what’s cool and what isn’t. We just wanted to embrace the weird now. Because we think she’s awesome.”