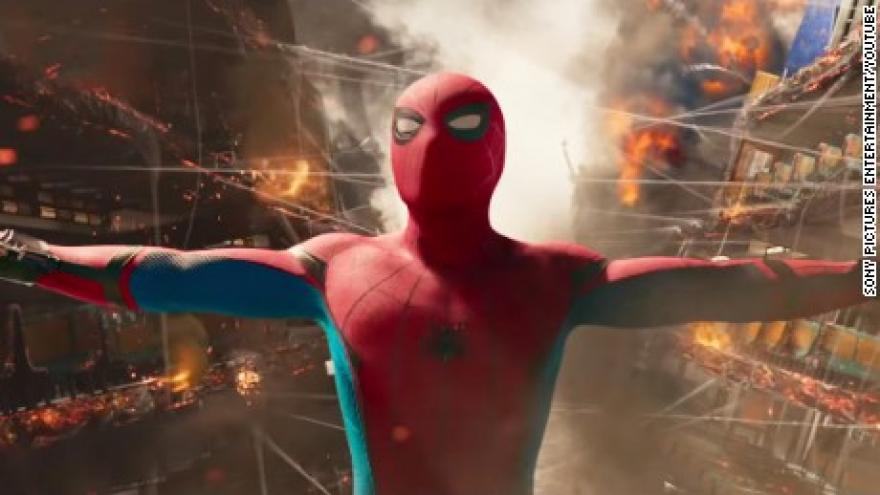 (AP) — "Spider-Man: Homecoming" swung past expectations, opening with an estimated $117 million in North America and giving a Sony Pictures a much needed hit.

"Homecoming" was one of the biggest tests yet for the notion that domestic moviegoers are growing weary of sequels and reboots and suffering so-called "franchise fatigue." ''Homecoming" kicks off the third "Spider-Man" iteration in the last 15 years, and the second reboot since 2014's "The Amazing Spider-Man," with Andrew Garfield.

But Sony has kept Spider-Man airborne. For "Homecoming," the studio returned to Spider-Man's teenage roots, casting Tom Holland in the part. Critics and audiences responded, with many calling Jon Watts' iteration one of the best Spider-Man films.

Those ingredients, along with a marketing effort that appealed to young moviegoers, pushed "Homecoming" to the best "Spider-Man" debut since 2007's "Spider-Man 3." The film, made for about $175 million, also grossed $140 million internationally over the weekend.

"It's a triumphant return for Spider-Man," said Josh Greenstein, Sony Pictures' president of worldwide marketing and distribution. "It's an incredible win for Sony, for our partners at Marvel and Kevin Feige and Amy Pascal, who produced it."

"Even though there have been other Spider-Man movies, this film feels fresh and new and different and special, and I think that's what's really resonating with audiences right now," added Greenstein.

Sony has struggled in the years since the infamous cyber hack of 2014, after which Tom Rothman eventually replaced Pascal as studio chief. (Pascal has since turned to producing, including this and future "Spider-Man" installments.) Box-office disappointments like the Dan Brown adaptation "Inferno," Ang Lee's high-frame-rate gambit "Billy Lynn's Long Halftime Walk" and the cultural flashpoint "Ghostbusters" have dotted its lineup.

But now, Sony has arguably the two biggest hits in the land: one a smartly recycled franchise, the other a quick and quirky original. Edgar Wright's acclaimed action-musical "Baby Driver" slid just 38 percent in its second week, coming in third with $12.8 million. The movie, which cost $34 million to produce, has already earned $56.9 million domestically.

As good as the news was for Sony, the weekend's results also proved a modern-day movie maxim: No one does franchise-building better than Marvel. "Spider-Man" is one of three major summer hits thus far, following the Marvel-Disney sequel "Guardians of the Galaxy, Vol. 2" and the Warner Bros.-D.C. Comics release "Wonder Woman."

The latter success came only after several high-profile missteps in Warner Bros.' attempt to build a Marvel-style universe of films. Earlier this summer, Universal's plans for its "Dark Universe" of monster movies got off to a rocky start with the poorly performing "The Mummy."

Sony's smartest move on "Spider-Man: Homecoming" might have been deciding to bring it into the Marvel fold.

"Nobody knows Marvel better than Marvel," said Paul Dergarabedian, senior media analyst for comScore. They really understand the mythology of these characters, the legacy of these characters, and Spider-Man is one of the crown jewels of the superhero world. No way was Sony ever going to give up on Spider-Man. So what do they do? They collaborate more closely with Marvel, and it paid off handsomely this weekend."

Estimated ticket sales for Friday through Sunday at U.S. and Canadian theaters, according to comScore. Where available, the latest international numbers also are included. Final domestic figures will be released Monday.