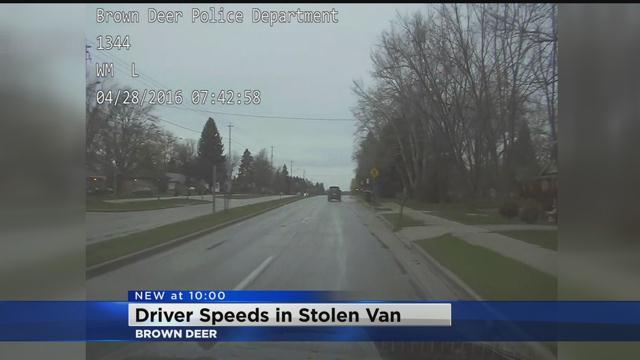 Take a look at this video. Sergeant Luke Kuehne says you can see that Kia minivan fly past his patrol car, going so fast it quickly goes out of sight.

The driver flew through three traffic lights and drove into oncoming traffic; driving so dangerously brown deer police ended up turning off their lights and sirens, refusing to chase the car.

River Hills police also tried to stop the driver on North Green Bay Road but again the car sped off.

A few hours later the car was found in the parking lot of a Brown Deer apartment complex.

"Out of state plates, a minivan, same make model and it ended up being the same vehicle. We did investigating and found it was a stolen vehicle out of Milwaukee. Once we got into the vehicle we found a stolen gun out of Waukesha and some drugs also," said Sgt. Luke Kuehne from Brown Deer police.

The stolen car was returned to its owner.

Meanwhile Brown Deer police say they're working with authorities in Milwaukee and Waukesha to find out who is responsible.