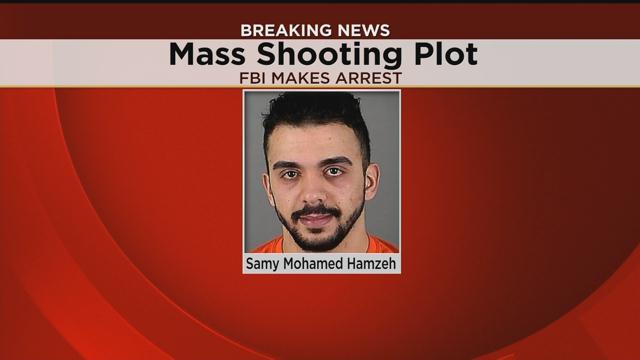 The building houses a Children's Dyslexia Center and a bar / restaurant, called the Double Eagle Pub

ORIGINAL: Federal Bureau of Investigation arrested a Milwaukee man who planned a mass shooting, according to a release by United States Attorney’s Office of Eastern District of Wisconsin.

Samy Mohamed Hamzeh, 23, has been charged with possessing machine guns and a silencer.

In October 2015, Hamzeh planned to travel to Jordan, enter the West Bank and conduct an attack on Israeli soldiers and citizens living in the West Bank.

Hamzeh later abandoned those plans and began to focus on conducting an attack in the United States.

During recorded conversations, Hamzeh explained that he wanted to commit a domestic act of violence on a Masonic Temple in Milwaukee.

Hamzeh had been under investigation since September 2015.

On January 19, Hamzeh took a guided tour of the Masonic temple, during which they learned meeting schedules and where people would be located during meetings.

Hamzeh learned meeting schedules and where people would be located during meetings. In a recorded conversation after they left, Hamzeh discussed his plans.

Hamzeh reaffirmed his intention to commit an armed attack on the temple and discussed in further detail how they would carry out the attack.

Hamzeh also, said, "I am telling you, to go without a silencer gun, you will be exposed from the beginning."

"One of us will stay at the door at the entrance and lock the door down, he will be at the main door down, two will get to the lift up, they will enter the room, and spray everyone in the room. The one who is standing downstairs will spray anyone he finds. We will shoot, them, kill them and get out. We will walk and walk, after a while, we will be covered as if it is cold, and we'll take the covers off and dump them in a corner and keep on walking as if nothing happened, as if everything is normal. But one has to stand on the door, because if no one stood at the door, people will be going in and out, if people came in from outside and found out what is going on, everything is busted."

"As long as the one on the door understands he has bigger responsibility than the others. For your information, he has to take care of everyone around him, the comers and the one that wants to go, he has to annihilate everyone, there is no one left, I mean when we go into a room, we will be killing everyone, that's it, this is our duty as for the one at the door, he must have 20 / 20 eye vision and always alert for all the traffic around him."

"I am telling you, if this hit is executed, it will be known all over the world."

Hamzeh made plans to purchase machine guns and silencers from two individuals who, unbeknownst to Hamzeh were undercover FBI agents. He met with them, along with CS-1 and CS-2 on January 25.

Hamzeh agreed to a price and paid it to the undercover agents, who then handed Hamzeh a bag containing two automatic weapons and a silencer.

Hamzeh carried the bag to the vehicle in which he had traveled to the meeting, and he placed the bag in the trunk of the vehicle.

He then was arrested and has been charged with illegally possessing machine guns.

"Samy Mohamed Hamzeh devised a detailed plan to commit a mass shooting intended to kill dozens of people. He also said that he wanted this mass shooting to be known the world over and ignite broader clashes. It is difficult to calculate the injury and loss of the life that was prevented by concerned citizens coming forward and by the tireless efforts of the FBI and the Joint Terrorism Task Force," said United States Attorney Gregory Haanstad.

Wisconsin Senator Ron Johnson released a statement about the arrest, saying ""I applaud the diligent work of the Federal Bureau of Investigation and Joint Terrorism Task Force that prevented what officers describe as a planned mass attack on innocent people in Milwaukee.  This incident reminds us of the importance of staying alert and reporting suspicious behavior to law enforcement authorities. It also reminds us of the reality that individuals motivated by radical beliefs pose a real threat to the security of Americans wherever they may reside — even here in Wisconsin."