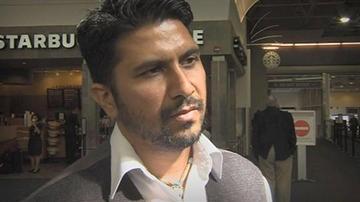 Milwaukee-- A local man who lost his father in the Sikh Temple shooting is now considering a run for Congress.

Amar Kaleka is forming an exploratory committee this week, and will decide next month whether to enter the race for Representative Paul Ryan's First Congressional seat.

Kaleka said Ryan is \"definitely out of touch with his constituencies for several years now, doesn't hold many town hall meetings.  He is not really speaking for his people, for the people.\"

The 35-year-old said he initially thought he'd wait until his 50's to run for public office, but that all changed after the mass shooting.  He says people in this community and throughout the country convinced him now is the time to form a grass roots campaign that will focus on education, immigration, and economic reforms, and continue his push for stronger gun control laws.

\"They really sat me down and  said look you're strong, you're a strong leader and I think it would be wise for you to consider...and I've considered it over the last several weeks.\"

Kaleka could face fellow democrat Rob Zerban in the 2014 Fall Primary.  Zerban, who lost to Ryan in last year's election, has formed an exploratory committee and plans to make an announcement October 26th about his possible run for Congress.