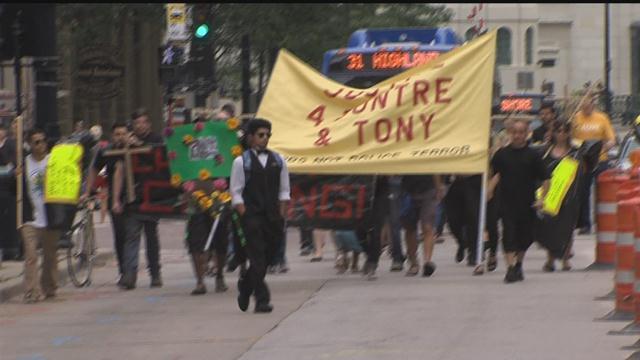 Sunday marks the one year anniversary of the shooting death of Michael Brown.

The unarmed 18-year-old from Ferguson, Missouri was shot and killed by officer Darren Wilson.

Brown’s death sparked riots and protests, re-igniting a debate on race in the US and starting the “Black Lives Matter” movement.

After months of controversy, a grand jury decided not to indict Officer Wilson saying he acted in self-defense. That incident strikes a nerve for the family of Dontre Hamilton, the Milwaukee man who was shot and killed by an officer last year.

In a sign of solidarity, Hamilton’s brother Nate led a solemn protest. He says he’s still waiting for answers and change, “we need to have more things in place for officers. We actually need in-depth training, more cultural training, more bias training. We need things that are relevant in the way that they police the community.”

Protestors carried about 600 body bags, one for each person who died in an altercation with law enforcement.

“All across the country, we’re awakening to the cries of generations that black lives matter. And so, this is a memorial and a remembrance of all those lives that never make the headlines. That the stories come and fade away,” says Steve Jerbi of All Peoples Church.