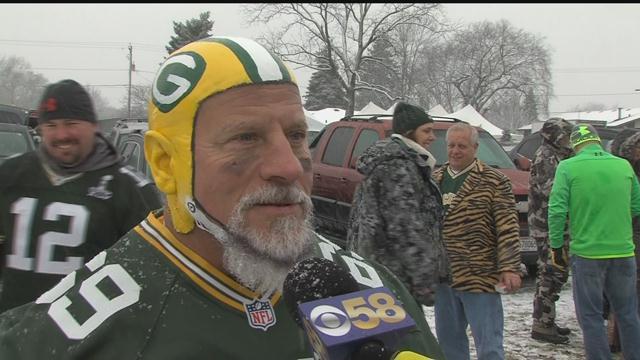 Fans certainly got the Lambeau experience Sunday with the falling snow and falling temperatures.

People might remember that just two weeks ago people were going to the game in Green Bay in shorts and t-shirts hanging out in about 70 degree weather.

But for people living in Green Bay who comes regularly to games, these conditions felt like a return to what's right.

But there's different kind of headwear in town today. The type that's never touched flurries - at least in the case of Chris Stump's cowboy hat.

"It's my first time in Lambeau, first time snow - all in one," Stump, who's from Houston, said.

"It's the perfect scenario: Texans, Packers, Green Bay - you got the snow, the weather. Everything's set," Stump said.

But answering the increase in the cowboy style is guys representing the mountain man look.

"We like to bring the bear brats with us. It would be more important if we were playing the bears but we're not," Tate Abler, from Plymouth, said.

For Packer fans, seeing the snow is not novelty. Instead it's almost something that's normalizing.

Maybe the best example of thriving is the man who owns a famous scalp. Steve "Helmethead" Keller says he got his nickname 14 year ago - ordained by fellow superfan St. Vince.

"He said, you know, if you shaved your head and cut your beard I could paint a helmet on that," "Helmethead" Keller said.

"So now this is kind of developed over the years. This is latex paint," he said.

"You can touch it, you can - as you've seen - kiss it, slap it and everything else. it actually keeps me warm. It's like a rubber membrane. The only time you'll see me in any kind of cap is if it's negative zero," "Helmethead" Keller said.

Still, the snow brings confidence - or the reverse if your a Texans fan.

"Well I'd love to go home with a 'W' but we're in your territory as you can see," Stump said.