Quick Update to Milwaukee snow total... as of 12:21 p.m. Milwaukee has received 3.7" of snowfall from this storm, 3.4 of which has fallen since midnight setting a new daily snowfall record for today's date. Previous record was 2.3"

New snow totals are coming into the office just before the noon hour, check it out: 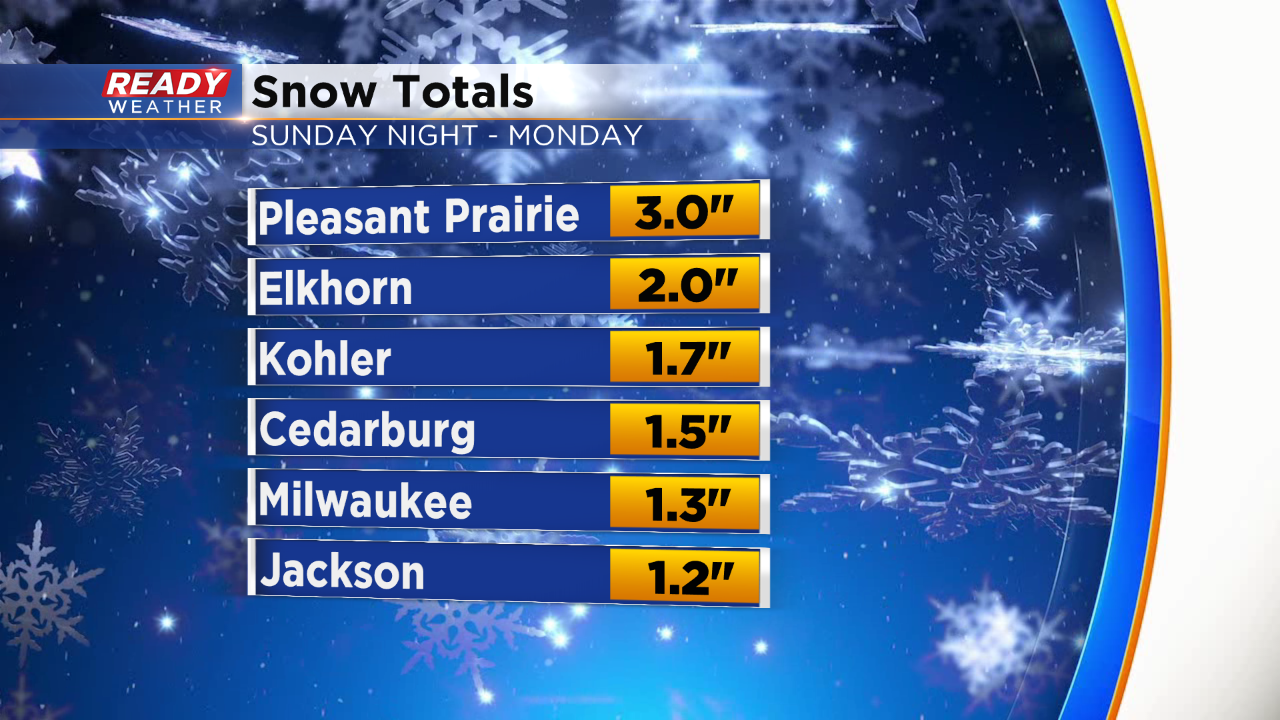 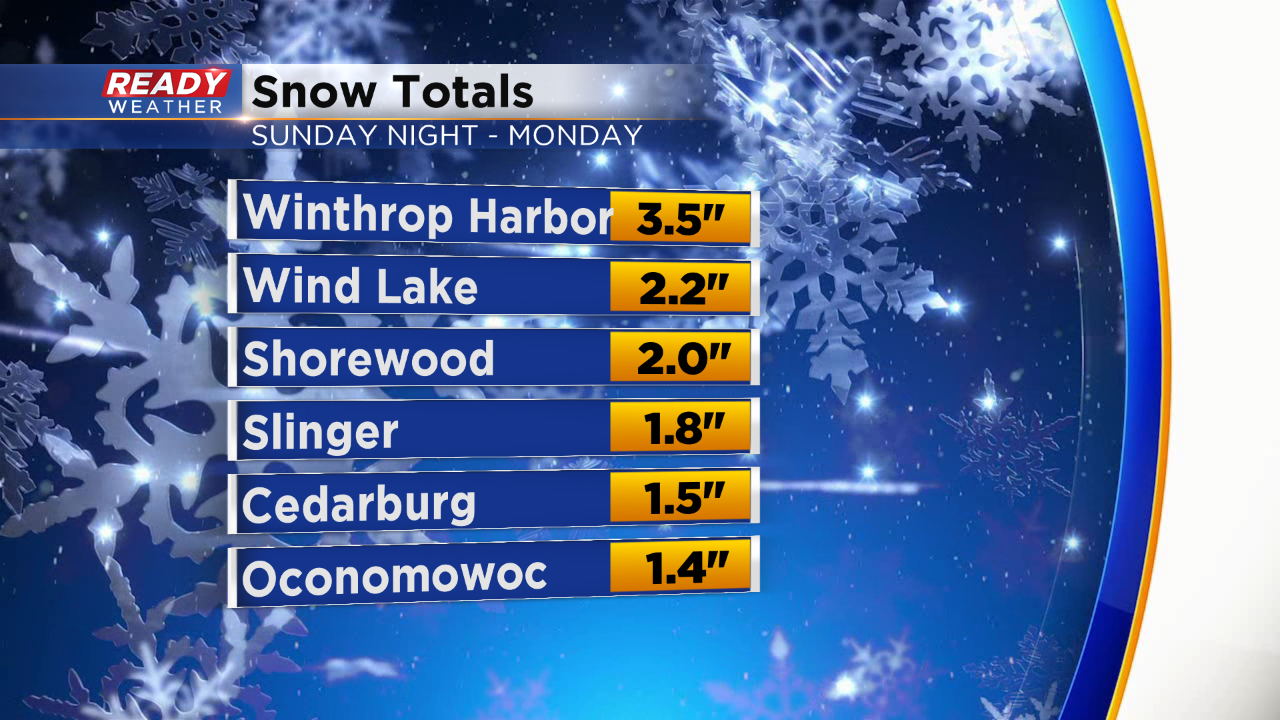 And the snow is still falling at this time across much of the area. Ready Doppler continues to track the back edge of this snow which should wind down by Advisory end time at 3 p.m. 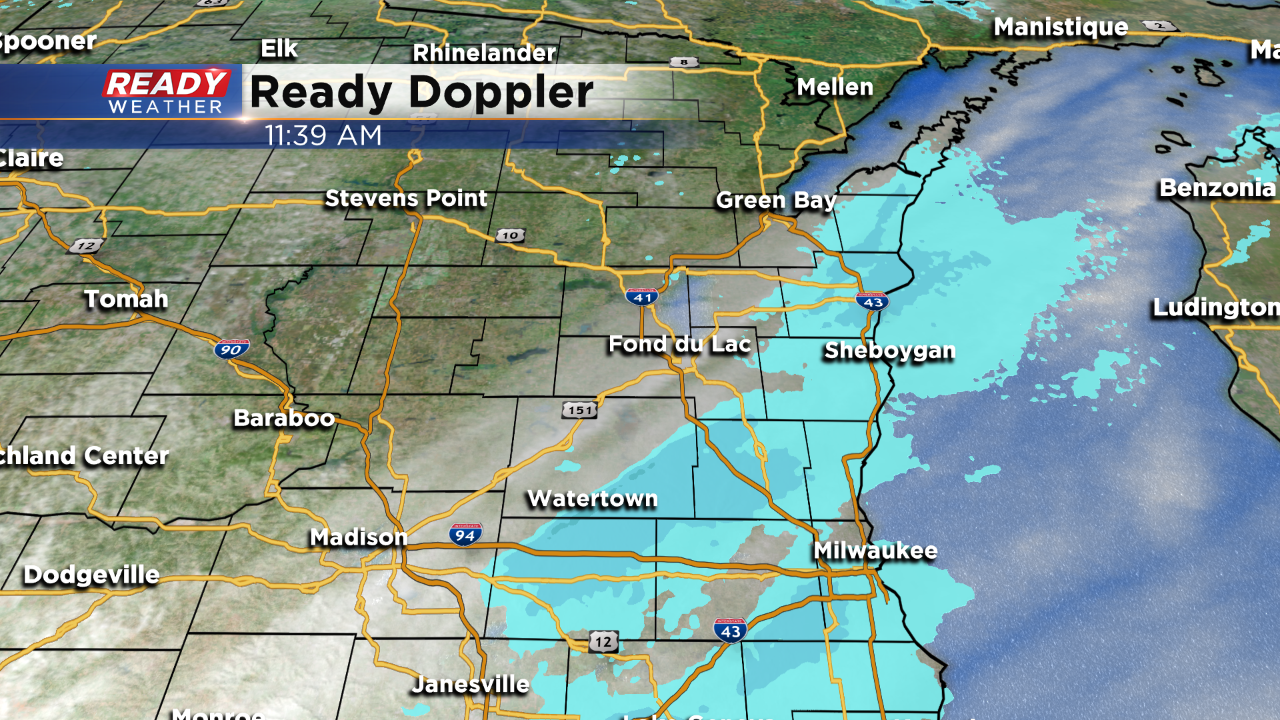 The other side of the story is the cold and wind. Gusts have been near 30mph today, and that's providing for wicked chills: 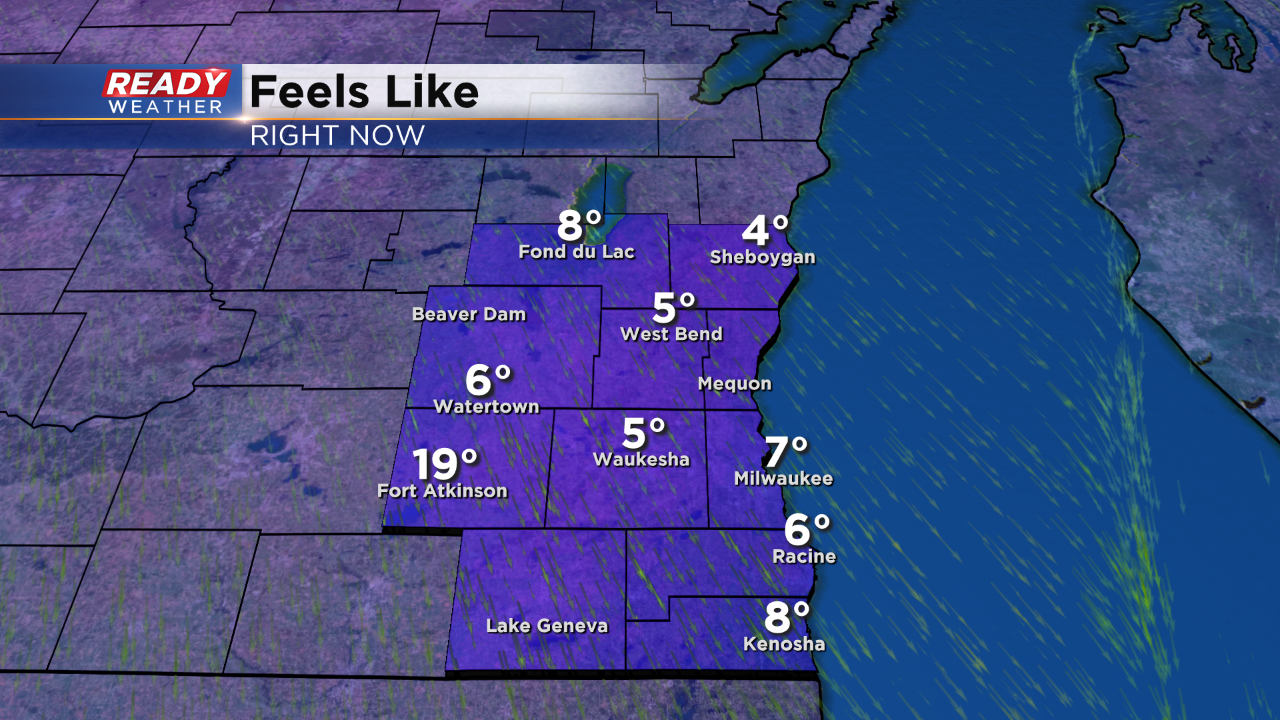 Sometimes things get worse before they get better. That phrase applies to our weather pattern for the next couple days as record cold likely grips the area. 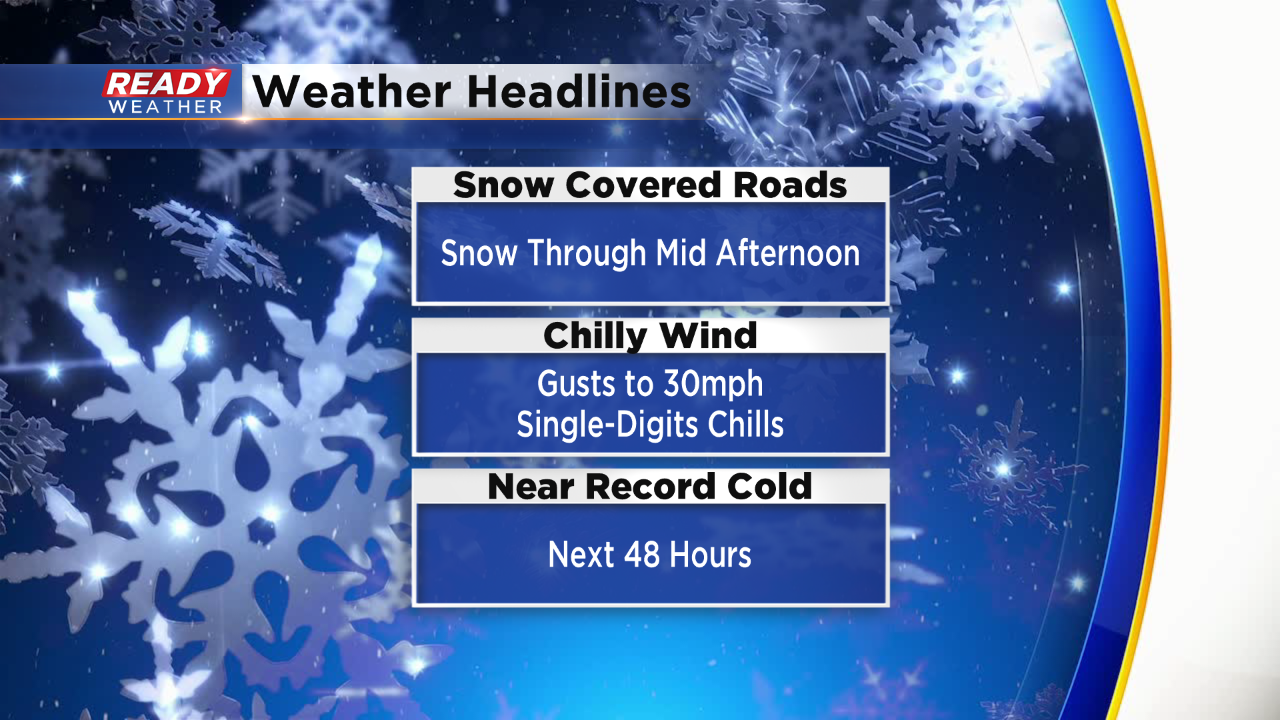 So far the majority of the snow in southeast Wisconsin Monday morning has remained light. The heaviest snow has been just to our south around Chicago. Even thought the rate of the snow has been light it has been steady all morning. The wind has been the big issue today gusting to 30 mph and causing blowing snow reducing visibility below a mile for hours at a time. 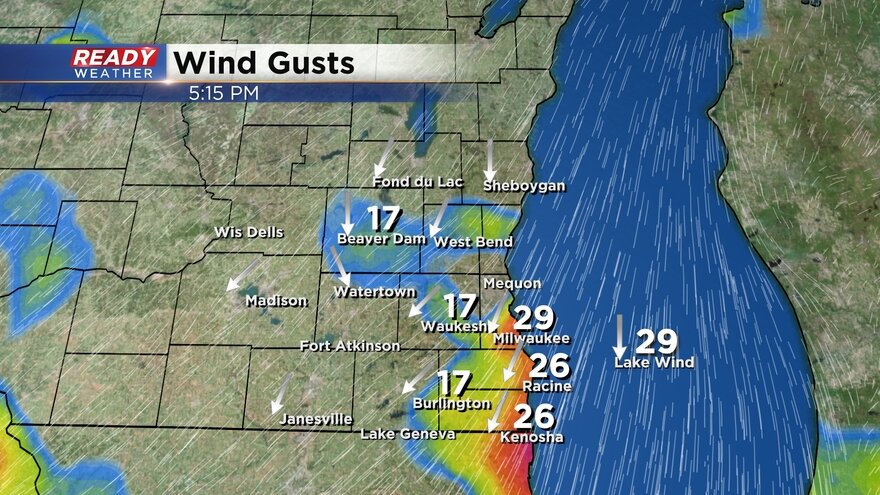 The wind will stay gusting through around midnight so expect blowing snow to continue even after the falling snow stops. Major roads all across the area are reported as snow covered so take your time if driving. 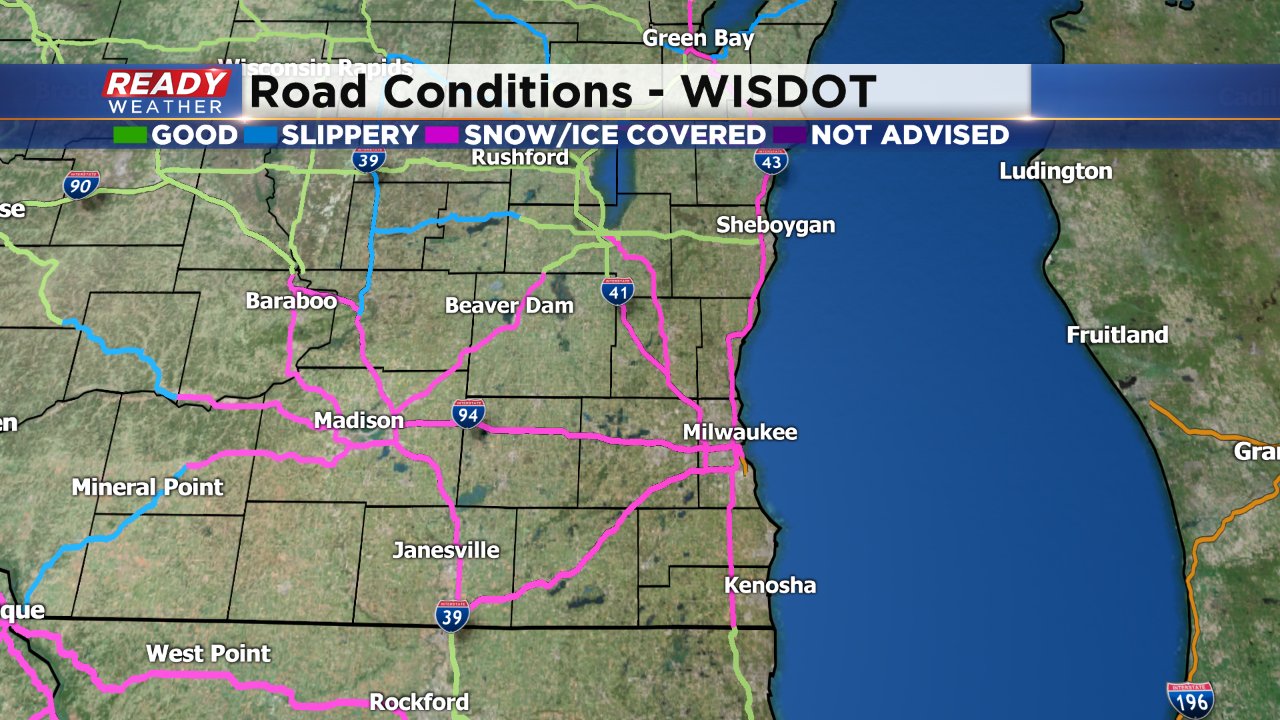 The snow is still expected to wrap up around noon from west to east. 1-4" of snow will likely for for many by the time the snow wraps up. After the snow comes the cold. We failed to hit a record cold high on Monday since the temperature at 1 AM was 27° - one degree warmer than than the previous record. We get close to record lows Tuesday morning with wind chills below-zero for everyone. Tuesday's cold high temp is our best chance to break a record. 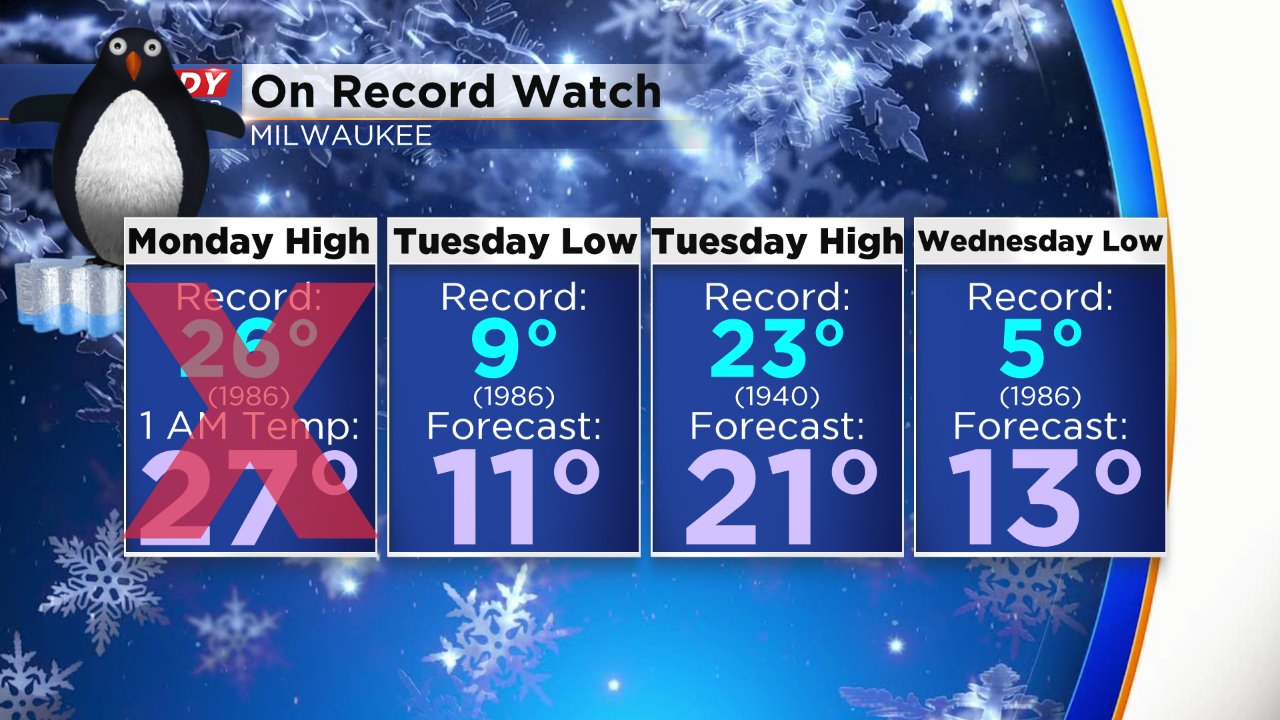 Steady light snow is continuing widespread across southeast Wisconsin. Snow reports are starting to come in with 1-2" for most. The highest totals have come in across southern areas as expected but even northern spots have picked up over 1". 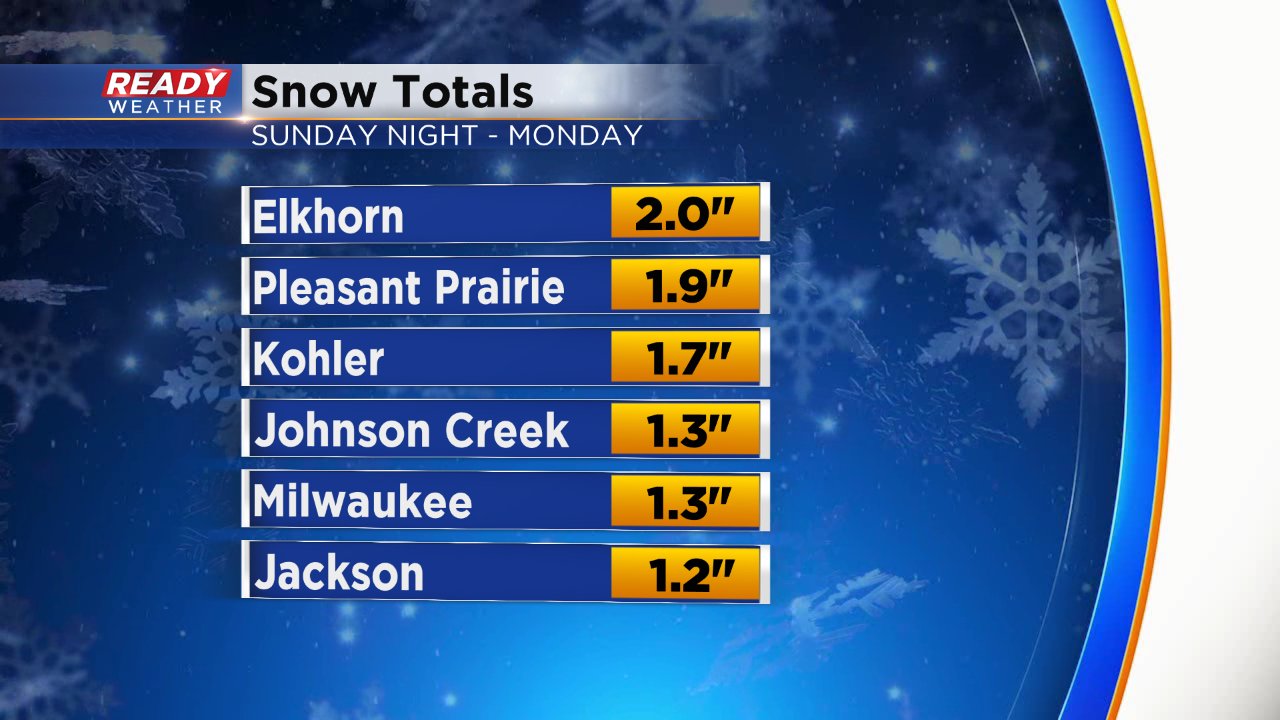 Despite the light snow, the wind is pretty strong so blowing snow is an issue. Visibility is down across most of the area below 1 mile in spots. Expect it to continue like this through the morning. 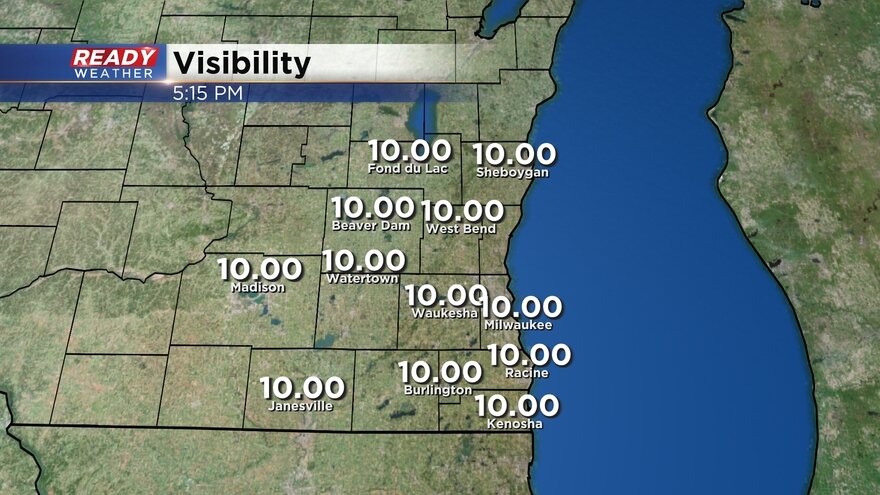 Monday marks our 7th day with measureable snow this season which according to the National Weather Service is the snowiest start to the season on record. 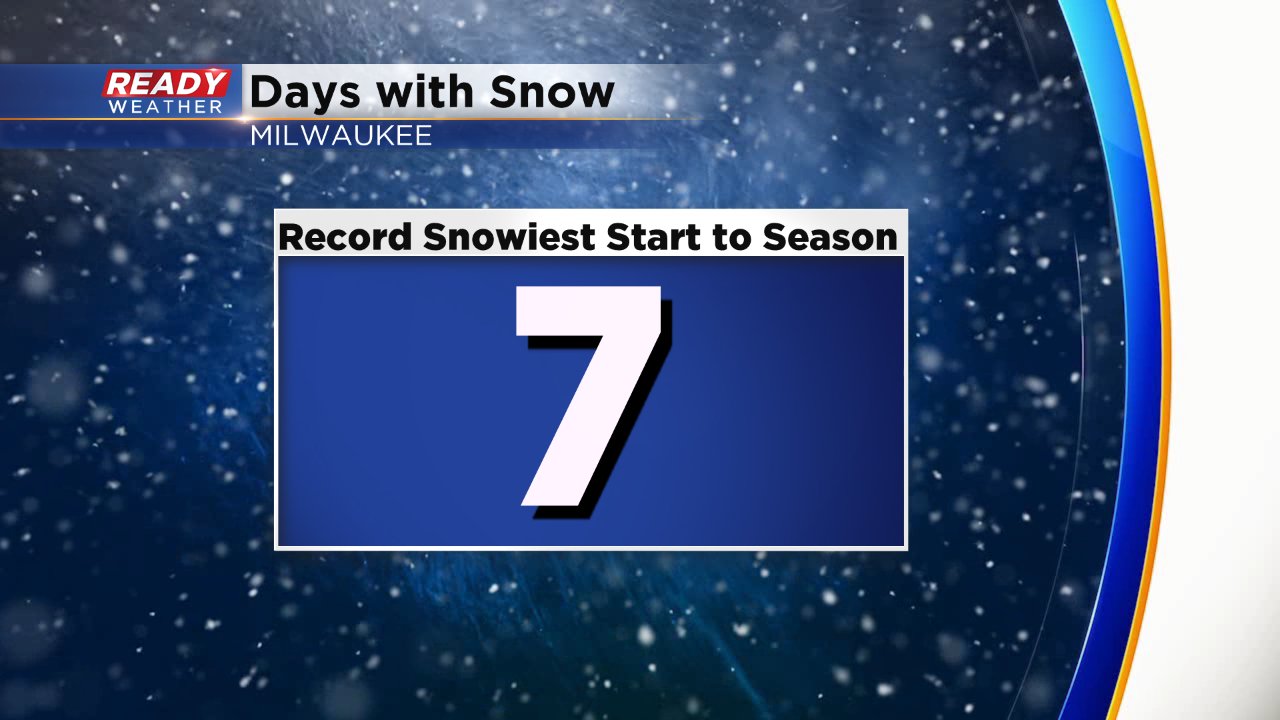 Steady snow continues to fall, especially in southern communities where brief times of moderate snow are possible. We are expecting a band of heavy snow to develop at some point this morning but exactly where is still in question. The location of that heavy band will likely determine who sees the heaviest snow. Southern communities near the Illinois border have the best chance to see up to 5". 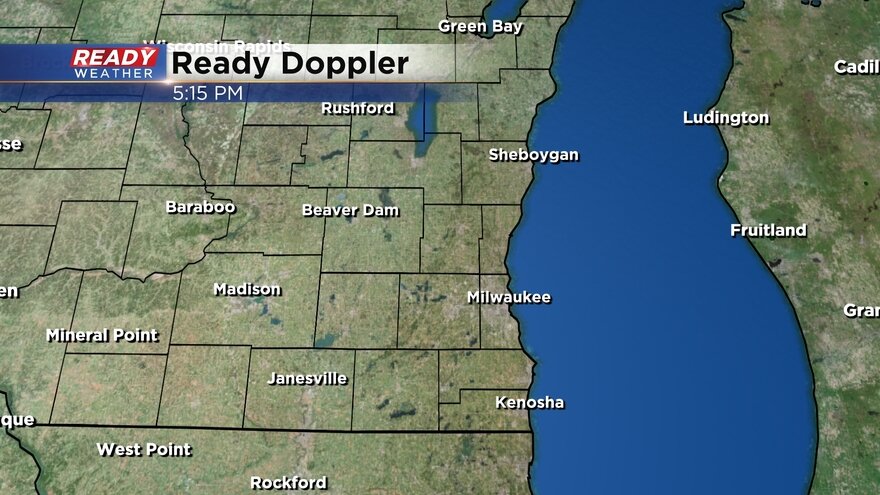 Snow started falling Sunday evening and will continue through all of Monday morning before wrapping up around noon in most spots. A winter weather advisory remains in effect for our southern half of counties including Jefferson, Waukesha, Milwaukee, Walworth, Racine and Kenosha until 3 p.m. 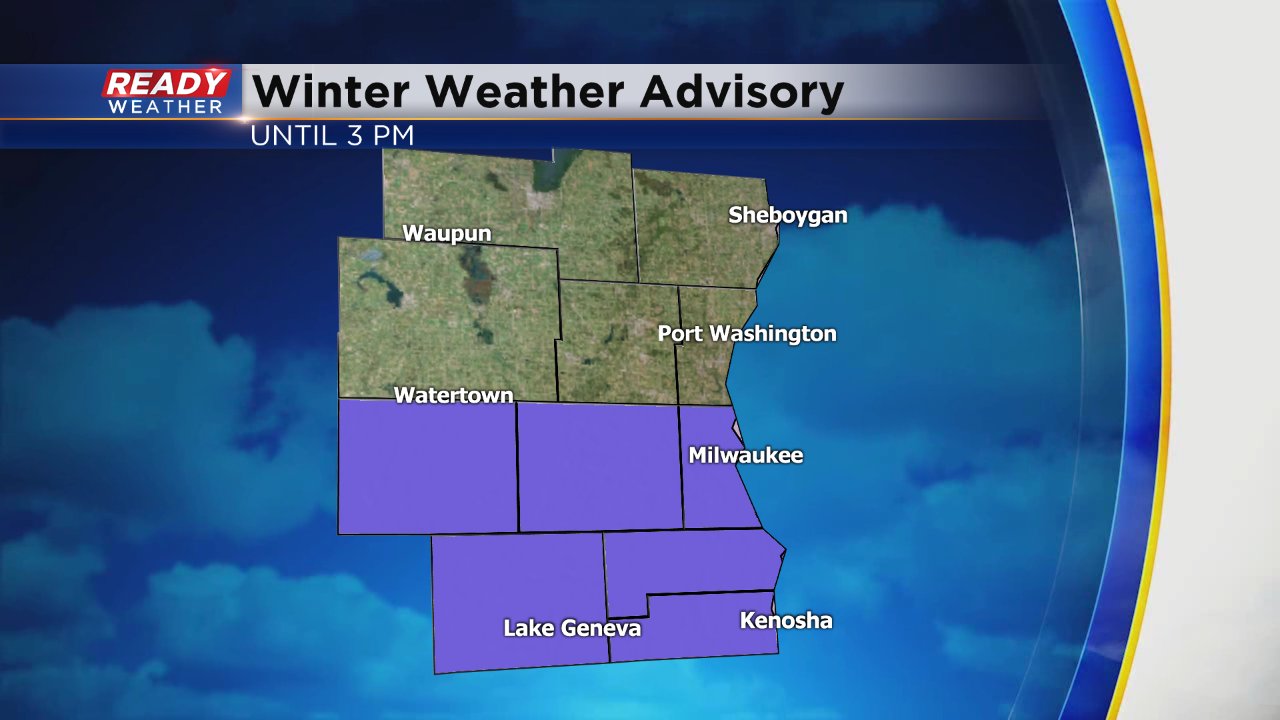 The snow will stay steady and light for most of the morning with some moderate snow bands possible in areas south of I-94. There will likely be a sharp gradient of snow from those that see just a dusting to those that get a few inches. The best chance for the most snow will be in southern communities where some spots could pick up 5". Areas north of I-94 will see up to 3" with lower totals the farther north you go. 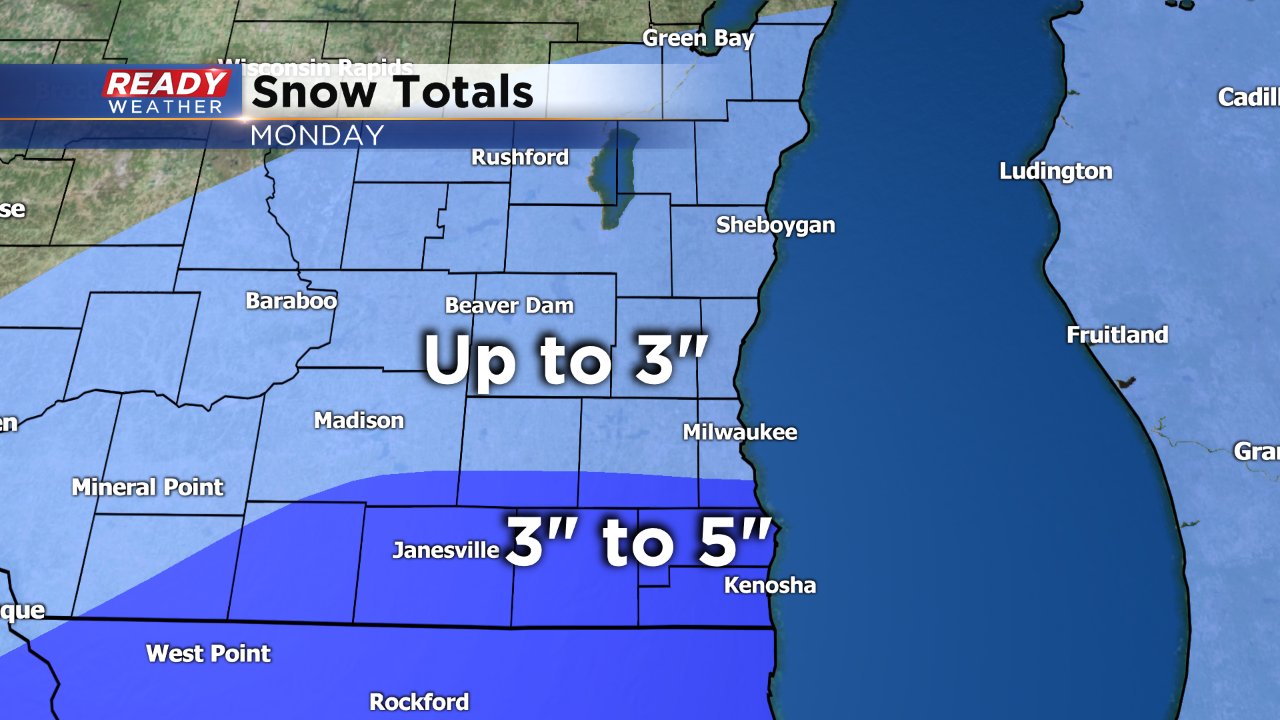 The snow will likely have a big impact on the morning commute. Wind will also be an issue with gusts to 30 mph possible, especially this afternoon. Blowing snow could be an issue. 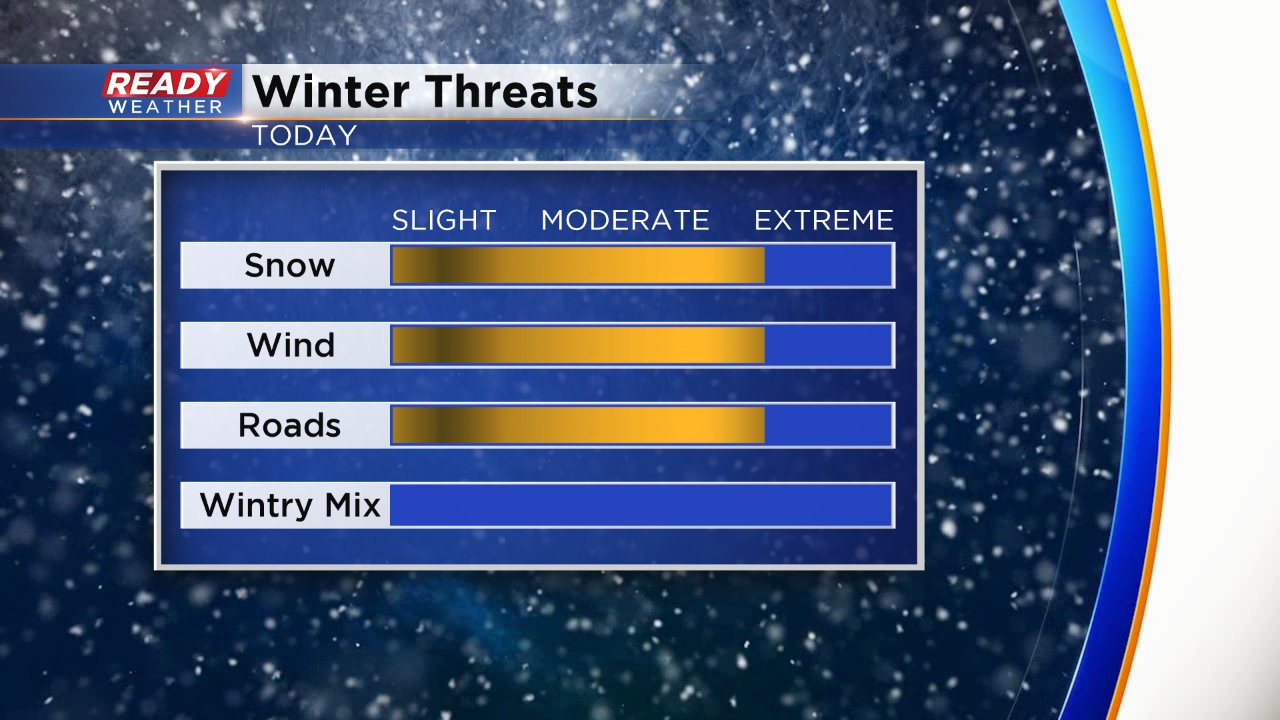 Download the CBS 58 Ready Weather App to track the snow throughout the day and look ahead to our next chance.