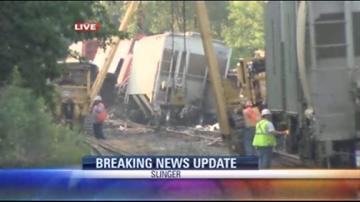 SLINGER -- Nearly 100 families in Slinger have been given the green light to return home after a train collision prompted evacuations Sunday night.

Emergency responders immediately noticed something leaking from the wreckage upon arrival and called for an evacuation.

They later found that nearly 5,000 gallons of diesel fuel had spilled, but the spill did not pose a threat to the public and residents were allowed to return home just after 1 a.m.

The Canadian National train was headed southbound on the tracks, headed to Illinois, Waldron said.

Wisconsin & Southern Railroad has not yet released a statement detailing its involvement in the collision.

There's no immediate word on what caused the collision and derailment.

Officials say cleanup could take up to a week. The DNR will also investigate the diesel spill.  The DNR says the diesel will be vacuumed up Monday afternoon.