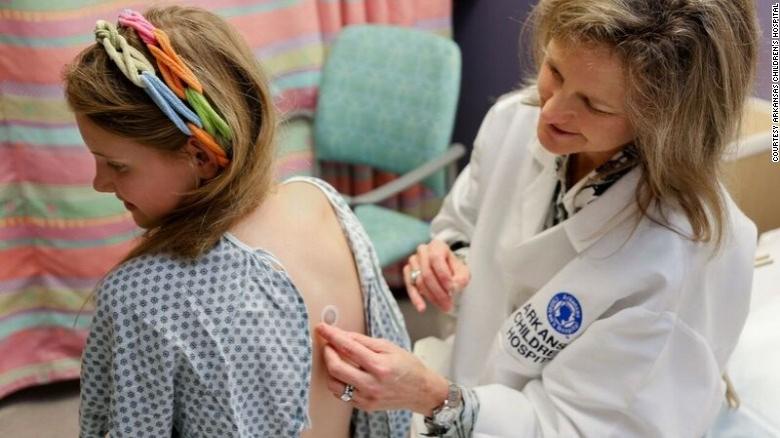 (CNN)Peanut allergies are among the most serious food allergies, requiring constant vigilance. In severe cases, exposure to even trace amounts of the nut can trigger a deadly reaction. But according to a new study published last week in the Journal of Allergy and Clinical Immunology, a tiny skin patch may help treat peanut allergies.

Over the course of a year, researchers from the Consortium of Food Allergy Research tested 74 peanut-allergic volunteers, ages 4 through 20, to see whether a daily Viaskin peanut patch could help raise their peanut threshold. The patch, called epicutaneous immunotherapy, released peanut proteins into the participants' skin, building cellular tolerance to the nuts.The results showed that participants who received higher doses of peanut protein in the patch were able to consume more peanuts after a year. The patch was the most effective on children ages 4 to 11 and significantly less effective on older participants, according to a statement from the National Institutes of Health, which funded the study through its National Institute of Allergy and Infectious Diseases.The peanut patch trial was conducted at five research sites: Arkansas Children's Hospital, the National Jewish Health Center in Denver, Johns Hopkins University, the Icahn School of Medicine at Mount Sinai and the University of North Carolina at Chapel Hill School of Medicine.

The newly published results were from the first year of the trial, but the researchers will continue monitoring the participants for a total of two and a half years.

Before the trial began, researchers assessed each volunteer's peanut allergy via an oral food challenge with food containing peanuts. The median amount of nuts tolerated, before having allergic symptoms was about one-seventh of a peanut, according to Dr. Stacie M. Jones, chief of allergy and immunology at Arkansas Children's Hospital and the study lead.After establishing an allergy baseline, the participants were given quarter-size patches on the insides of their upper arms for adolescents, or on their backs for younger kids.

The patches were administered daily for the 52-week period, but Jones said placement varied in order to allow any skin irritation to heal.One of the main concerns for researchers, as well as peanut-allergic volunteers, was whether the patch would trigger a harmful allergic reaction. Of the 74 participants, one teenager had to leave due to a patch reaction, according to Jones.

About 80% of the kids who used peanut patches (both low- and high-dose strength) had some reaction, Jones said, but they were mainly mild, like bumps and redness on the skin surrounding the patch.Jones explained that the patches, which are manufactured by DBV Technologies, are coated with sub-clinical doses (meaning they have a very small potential of triggering allergic reaction) of raw peanut material. When peanut proteins are released into the skin, it starts an immune reaction in the cells, she said.

Importantly, she explained, the peanut proteins from the patch do not enter the bloodstream. After participants handled the patch, they were warned not to touch their eyes or mouths and to wash their hands immediately.After a year of using the skin patches, the three groups were again assessed for peanut allergies. This time, many participants who had used peanut patches could tolerate more peanuts than those who used placebo patches.

Before the researchers began the trial, they set a goal of a tenfold increase in participants' peanut threshold, meaning they could eat 10 times more peanuts at the end of the year, Jones said. And the treatment seemed to work for many low-dose and high-dose patch wearers, but not for everyone.Forty-six percent of participants who had 100-microgram patches were able to raise their peanut threshold at least tenfold, as did 48% of the 250-microgram patch wearers. Only 12% of the placebo group met the tenfold goal.

Children ages 4 to 11 showed the most improvement, Jones said, but kids 12 and older were less affected.Dr. Jennifer Shih, an assistant professor at Emory University School of Medicine who specializes in pediatric allergies, said the peanut patch study is promising, but it doesn't mean an end to peanut allergy problems."This (patch) is not so that somebody can eat a bunch of Reese's for Halloween," she said. Rather, those who use a peanut patch are "hopefully protected from accidental exposure" to peanuts.

From unclear food labels to large school cafeterias, it can be difficult to avoid peanuts. This can cause a lot of anxiety, particularly for severely allergic patients, Shih said. The patch's protection -- even if it increases someone's tolerance just a couple of peanuts -- could ease some anxiety both for allergic children and for their parents.

"To avoid potentially life-threatening allergic reactions, people with peanut allergy must be vigilant about the foods they eat and the environments they enter, which can be very stressful," Dr. Anthony Fauci, director of the National Institute of Allergy and Infectious Diseases, said in the National Institutes of Health statement. "One goal of experimental approaches such as epicutaneous immunotherapy is to reduce this burden by training the immune system to tolerate enough peanut to protect against accidental ingestion or exposure."

The patch may also ease anxiety because it's not a shot like other allergy treatments. Since young children are especially afraid of needles, the fact that the patch appears to be most effective on kids ages 4 to 11 is exciting, Shih says.

Still, there are some concerns to consider. The study tested only kids with peanut allergies and no other medical issues, so there's no way of knowing whether the patch can aggravate other problems, such as additional allergies, Shih said.Problems may occur if patients didn't use the patch as directed or if they forgot to put it on for a day. "They have to (use the patch) every day, or they might become intolerant," Shih said. However, the study did prove successful in participant retention: Nearly 97% of participants applied the patch every day, according to Jones.

The results of the study were also "not 100%," Shih said. Though about half of the participants succeeded in raising their peanut threshold with the patch, that still wasn't the majority of the group.

"When I saw this study, I was excited because it is positive, and it can give hope," Shih said. "Still, it's not something we'll run off to the store to get right away."