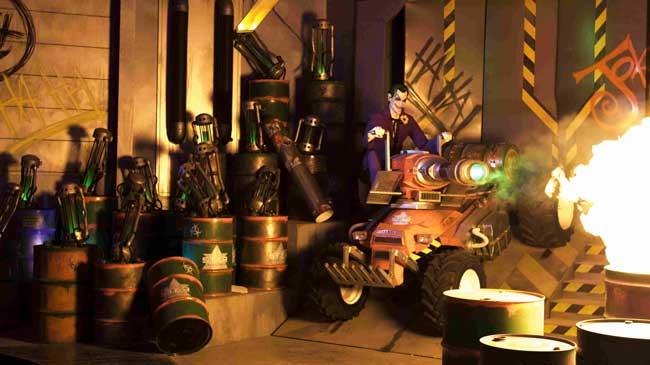 This amazing thrill ride was named by USA Today readers as one of the Top Ten New Amusement Park Attractions of the year and was most recently awarded Best New Attraction by Theme Park Insider.

Slated to open at Six Flags Great America in 2016, guests will become members of the JUSTICE LEAGUE Reserve Team, and engage in a full-sensory journey as they battle alongside BATMAN™, SUPERMAN™, WONDER WOMAN and GREEN LANTERN against Lex Luthor, The Joker and his henchmen.

Traveling in six-passenger vehicles, riders must outsmart Lex Luthor and The Joker and save the city of Metropolis. \"Introducing an attraction that combines this level of technology and the iconic DC Comics characters will bring an unmatched, interactive experience to our guests in 2016,\" stated Hank Salemi, park president. \"The addition of JUSTICE LEAGUE: Battle for Metropolis is another example of our park’s commitment to delivering new and innovative thrills every year.\"

JUSTICE LEAGUE: Battle for Metropolis will feature a 22,000 square foot HALL OF JUSTICE to house this full-sensory thrill ride, a 4D ride experience with wind, fire, mist and fog effects, plus life-like animatronic characters, a dramatic fight as the JUSTICE LEAGUE Reserve Team travels through laughing gas and flames in 10 high-intensity scenes, one of the first-ever virtual loops, giving riders the feeling of going head over heels, high definition 3D animation that fully immerses riders into the city of Metropolis, state-of-the-art gaming elements, and 6-passenger vehicles with multi-degrees-of-freedom to transport riders through all the exciting twists and turns without limitations.