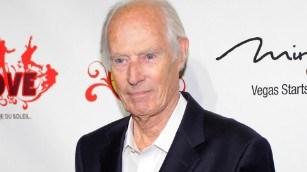 (CNN)Sir George Martin, the music producer whose collaboration with the Beatles helped redraw the boundaries of popular music, died Tuesday, according to his management company. He was 90.

Martin died "peacefully at home," according to Adam Sharp, the founder of C A Management which represents the music producer.

"In a career that spanned seven decades he was recognized globally as one of music's most creative talents and a gentleman to the end. The family ask that their privacy be respected at this time," Sharp said.

Martin worked with countless others over a career that spanned decades, including Peter Sellers, Shirley Bassey, America, Cheap Trick, Jeff Beck and Celine Dion. But his fame, and his influence, rests on the seven years he spent with the Beatles, the most successful group in music history -- a group Martin helped propel to the top spot with his musical expertise, tasteful arrangements and willing experimentation.

"When I first met the Beatles in 1962, I didn't think much of their songs at all," he told JazzWax.com. "But they learned so quickly how to write a hit. They were like plants in a hothouse. They grew incredibly fast."

The polished, classically trained producer began as a father figure to the four somewhat scruffy lads from Liverpool, capturing their songs on tape with a minimum of fuss or studio gimmickry. But by 1966, he was as much a collaborator as mentor, using his knowledge of both musical structure and recording technology to help the band realize its musical visions.

Typically modest, he described his role as a producer in matter-of-fact terms.

"Put simply, my job was to make sure recordings were artistically exceptional and commercially appealing, maximizing the qualities of artists and songs," he told JazzWax.com.

In Martin's hands, however, that job was both expansive and unobtrusive. Songs produced by George Martin had a distinctive touch but rarely called attention to his work. The spotlight was on the music.

And yet his role cannot be overstated. Working with engineers such as Norman Smith and Geoff Emerick, Martin helped the Beatles turn the studio into another instrument.

He added a string quartet to "Yesterday." He allowed backward tape loops on "Tomorrow Never Knows," even if he couldn't make John Lennon's voice sound like chanting Tibetan monks -- one of Lennon's characteristically absurd requests.

The work reached a pinnacle in 1967, with Martin's ingenious oversight of the "Penny Lane" / "Strawberry Fields Forever" single and the album that often tops the lists of greatest ever: "Sgt. Pepper's Lonely Hearts Club Band."

By then, even he wondered whether the group had gone too far.

"As we were getting longer and longer into the album, and more and more avant-garde, I was wondering if we were being a little over-the-top and a little bit, maybe, pretentious," Martin recalled in a 1992 documentary about "Pepper." "Is the public ready for this yet?"On the surface, the contrast between the patrician-looking Martin and his long-haired musical charges couldn't have been starker. He was movie-star handsome, reserved, establishment; they were casually pretty, energetic, counterculture. He was the World War II generation; they were the ones who helped upend it.

But the two sides had a surprising amount in common. Martin came from a working-class background, as did the Beatles. Moreover, the producer was a keen fan of comedy, having worked with members of "The Goon Show," such as Sellers and Spike Milligan, and produced the satirical "Beyond the Fringe" troupe. Their work was well known to the comedy-loving Beatles.

It was a sense of humor that may have initially bound them together. According to legend, when introduced to Martin at an audition for his record label, the producer asked the band whether there was anything they didn't like. George Harrison quickly responded, "Well, for a start, I don't like your tie."

At EMI's staid Abbey Road Studios, where the studio engineers were required to wear lab coats, Martin could have easily taken offense. Instead, it was the beginning of a beautiful friendship.George Henry Martin was born in London on January 3, 1926. He took an interest in music from an early age, teaching himself piano and becoming enraptured by radio broadcasts of orchestras. By the time he was 15, he was running a small band, George Martin and the Four Tune Tellers.

He enlisted in the Royal Navy at 17 and served as a pilot and commissioned officer, though he "managed to evade Japan," he told Rock Cellar magazine. Upon leaving the military in 1947, he enrolled in the Guildhall School of Music and Drama, studying piano and oboe.

After a short stint at the BBC, he joined EMI Records' Parlophone label, a tiny part of the huge record conglomerate. Martin had some success -- he did a hit record with actor Peter Ustinov in 1952 -- but was still caught off-guard when he was asked to take over the label in 1955. He hadn't yet turned 30.

Parlophone was primarily focused on classical music and was forever in danger of being shut down. Martin expanded the repertoire, signing comedy acts such as the Goons and some pop singers. In a pinch, he even performed himself under assumed names.

He liked the freedom to experiment: "I made a lot of what I call 'sound pictures' with actors and comedians because it was fun to do. I'm a person who gets bored quite easily, and I don't like doing the same thing over and over again," he said.Still, he had his eye on a rock 'n' roll act, a sure entry into the youth market. At the time, Britain was top-heavy with teen idols, ranging from the sublime (Cliff Richard and Billy Fury) to the marginal (Johnny Gentle and Dickie Pride).

In February 1962, Martin received a call from a music publisher who was trying to drum up interest for a band managed by a friend, Brian Epstein. Martin met with Epstein and heard his group, the Beatles.

He was not impressed. The songs were weak and the tempos uneven.

Nevertheless, he liked a few aspects of the group and eventually agreed to sign them.

"I just thought they were interesting and had something slightly different, and I'd like to know more about them," he told the BBC in 1964.

Their humor, typified by Harrison's quip, helped win him over.

Still, Martin quickly learned the Beatles were not easily moldable like other bands of the era. There was no frontman: Lennon, Harrison and Paul McCartney all sang lead.

Lennon and McCartney were also determined to make it as songwriters and were dismissive of Martin's suggestion, at an early session, that they release a Mitch Murray song called "How Do You Do It." Another producer may have put his foot down, but Martin decided to trust the band's judgment. They soon rewarded him by coming up with "Please Please Me," the group's first UK No. 1.Martin was always a valuable partner to the Beatles, but particularly so in the early years. It was Martin who suggested speeding up the tempo of "Please Please Me," originally a Roy Orbison-inspired slow rocker. It was Martin who suggested to Epstein that he meet with Dick James, who became the group's song publisher. And it was Martin who found ways of making the group's experiments work, whether it was feedback on "I Feel Fine," the use of a sitar on "Norwegian Wood" or the harpsichord-sounding piano on "In My Life."

Not one to miss a trick, he also recorded instrumental versions of the band's hits during the height of Beatlemania and provided incidental music to the group's film "A Hard Day's Night."By 1965, Martin was chafing at EMI's oversight and decided to become an independent producer. He established Associated Independent Recording, though he continued to work with the Beatles as well as other EMI acts.

He also entered his most fruitful period. The Beatles were breaking ground, and Martin was right along with them.

On "Strawberry Fields," he recorded two versions: one using more standard rock-band instrumentation, the other with an orchestra. When Lennon asked to put the two together -- despite the versions being in different keys and tempi -- Martin and engineer Geoff Emerick obliged and, by happy accident, found they fit almost perfectly by speeding one version up and slowing the other down.

The "Sgt. Pepper" album was an even bigger challenge. Though overflowing with multitracked harmonies and clever arrangements, it was recorded on a four-track console. Martin would mix four tracks down to one and then record more, careful to limit distortion.

Yet, out of this rudimentary setup came songs such as "A Day in the Life," with its rumbling piano, tweaked Lennon vocal and explosive crescendos.

As the Beatles, beset by legal issues and differing philosophies, started splitting apart, Martin grew weary of the atmosphere. He sat out a number of the "White Album" sessions, entrusting the work to assistants such as Emerick and Ken Scott. He was left out of the troubled "Let It Be" sessions entirely and returned for "Abbey Road" only after assurances that the group would put aside its bickering.

It was the last album he would do with the full band, though the single version of "Let It Be" released in 1970 bears his credit.After the Beatles' breakup in 1970, Martin worked with a wide variety of artists. He had particular success with the group America, producing their Top 10 hits "Tin Man," "Lonely People" and "Sister Golden Hair."

He also produced Jeff Beck, Cheap Trick, UFO, Ultravox, the original cast recording of the Who's "Tommy" and the movie soundtrack of "Sgt. Pepper's Lonely Hearts Club Band." Elton John had Martin produce his updated version of "Candle in the Wind," done in honor of Princess Diana, in 1997.

Martin also maintained his relationship with Paul McCartney, overseeing the explosive James Bond theme "Live and Let Die" and one of McCartney's most highly praised solo albums, "Tug of War."

The Beatles, however, were never far away. When the surviving members of the group embarked on the "Anthology" project in the mid-'90s, Martin was back in the producer's chair, overseeing all the old recordings. He brought in his son, Giles, to help with such projects as "The Beatles Love," the soundtrack to a Cirque du Soleil show that mixed and matched snippets to Beatles songs.

By that time, his ears weren't what they used to be, he admitted. Indeed, he became the vice-president of Deafness Research UK, a charity dedicated to hearing issues.

He finally retired, officially, about 2009, when he was 83. Three years later, Giles Martin said he was "enjoying early retirement."Over his long career, Martin won pretty much every honor that could be given in the music world -- and elsewhere. "Sgt. Pepper" was the Grammy winner for 1967's album of the year; Martin was later given a Grammy Foundation Leadership Award. He was inducted into the Rock and Roll Hall of Fame in 1999.

Twenty-three Martin productions hit No. 1 in the United States. Thirty did so in the UK.

And he was knighted in 1996. Indeed, when it came time for someone to serve as musical director for Queen Elizabeth's Golden Jubilee in 2002, Martin was the choice.

Throughout his life, Martin generally played down his accomplishments. But that wasn't to say he didn't know how much he had achieved.

"Would I like to do something again? No, I wouldn't want to do anything again. I'm not a person to look back," he told Rock Cellar in 2013. "I don't honestly think I could do anything better than what we did."