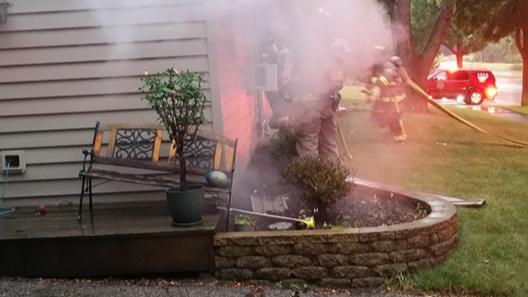 It was 6:30 Sunday morning, when Jenny Dempsey heard a noise she'll never forget, shaking her home off Fox River Parkway in Waukesha.

"My daughter described it as dynamite," she says. "You knew something was wrong."

Dempsey says her family rushed outside, noticing burn marks on a large maple tree behind the house. That's when they saw a small fire on the side of their neighbor's home. After throwing water on that fire, they turned around, only to realize their home was on fire as well.

"When they got that fire taken of, we smelled smoke, and that's when we realized that something else was really happening."

The Waukesha Fire Department says crews were initially dispatched for one fire, but ended up fighting two. Lt. Dan Berghoefer believes the strike traveled through the tree, into the ground, and through underground connections between the two homes. The fire inside the Dempsey's home was electrical.

"It's very rare," he says. "In my career I've only ever seen lightning impact a large area a couple of times."

Nobody was injured in either home, but the Dempsey's home sustained extensive damage. Power to the home has been shut off, so the family will have to find somewhere else to stay for a few weeks.

"One of the first things that they did was just start breaking up the walls on the outside of the house," says Dempsey. "The bedrooms, and the bathroom, the drywall's all torn apart."

A large branch from the maple tree also fell into the Dempsey's yard, and onto their roof. Dempsey says she would have never expected a lightning strike to do so much damage, especially to two homes.

"It happens in the blink of an eye," she says. "Just mother nature."