Shot Mom Jumps on Son to Protect him from Sniper Fire 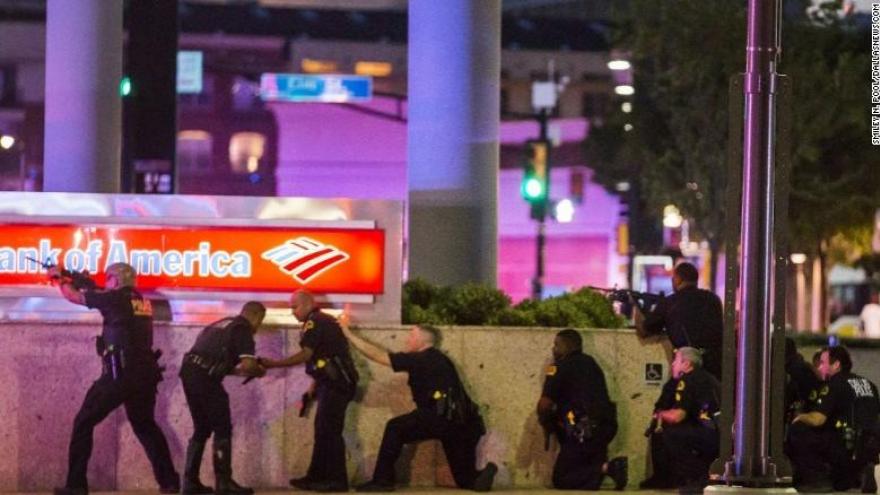 (CBS NEWS) When sniper fire broke out at a protest in Dallas on Thursday, killing five police officers, a woman jumped on top of one of her four sons to shield him from the gunfire, despite being shot herself, her sister told CBS station KTVT.

Dallas Mayor Mike Rawlings told CBS News on Friday morning that 12 officers and two civilians in total were shot in the rampage.

Theresa Williams told KTVT her sister, Shetamia Taylor, and her sons were just starting to leave when the first shots were fired.

"After that first gunshot, she heard the second gunshot, and after that it was just a lot of gunshots," Williams said. "She said they just came so fast and they wouldn't stop."

One of those shots hit Taylor in the back of her right leg.

"She immediately jumped on top of one of her boys, the 15-year-old," Williams said. "She jumped on top to cover him on the ground as she pushed him in between two cars and the curb."

Her three other sons ran in opposite directions as the gunfire continued.

"She laid there, she said it was about five minutes before cops even got to her and pulled her from the area where she was because the shots were coming so fast, not even realizing she was really shot at the time," Williams said.

Williams said all her sister could think about were her other three boys, two of whom had made it to a building and were sheltering in place. The third eventually reunited with the family.

The 15-year-old covered by his mom was taken home from the hospital while his mother was being treated for her wound.

"He was just scared," Williams said. "He didn't say much. When we walked into the hospital, he just grabbed our necks and hugged us. There wasn't much he could say. He was just scared. He's covered in his mom's blood, and he's standing there, and he's scared."