Shorewood Student Lillian Jochmann Back Home From Reporting at the RNC 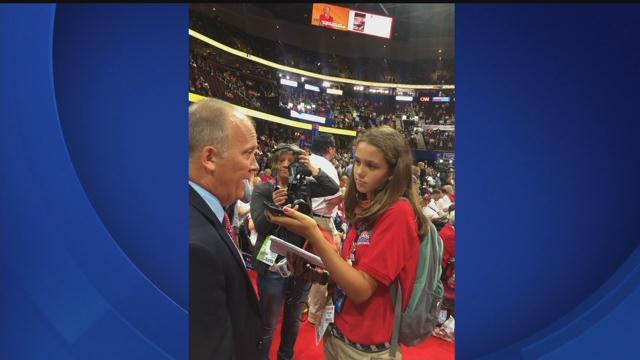 Lilian Jochmann is a 12 year old from Shorewood, Wisconsin and already can now put reporting for the Republican National Convention on her resume.

Jochmann was selected as part of the award-winning Scholastic News Kids Press Corps.

It's the country’s oldest and largest student reporting program.

The motto is simple:  “News for Kids, By Kids.”

They provide  coverage of breaking news, entertainment, and sports events from their hometowns and on the national stage.

Jochmann was a special live guest on the CBS 58 News at 4 p.m. on Tuesday.

She said when she talks to her peers about what she's seen in the political process, they are genuinely interested.

"Since a kid is going there, they become interested about it," explained the soon to be seventh grader.

She says she was well received by the adult media members.

"Everyone who I interviewed, I was lucky to meet people who were excited that I was only 12 and was covering something this big."

She said she wasn't planning on meeting him and didn't have any prepared questions.

So, she decided to ask him what kids could do to achieve social justice. She said she just thought it would be something other kids would find interesting.

"He said the most important thing was to get a good education and know what's going on around the world."

Jochmann is doing just that.