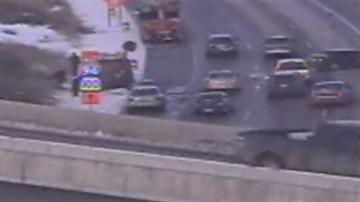 MILWAUKEE-The Sheriff's Office and Highway Patrol out with a warning about staying in your car after a crash.

Video was released of an incident in the Zoo Interchange that resulted in two people hurt.

Apparently they had gotten out of their cars to see the damage and thought they were safe alongside the road.