Sheriff deputy hospitalized after being hit by suspected drunk driver 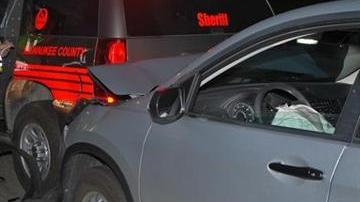 MILWAUKEE COUNTY--A Milwaukee County Sheriff Deputy was taken to the hospital early Saturday morning after being hit by a suspected drunk driver.

Sheriff Officials said that at the time the deputy was seated in the stopped squad with its lights activated.

The deputy was injured and taken to Froedtert Hospital with non-life threatening injuries.

The driver of the striking vehicle was identified as 20-year-old Janet K. Kim of Brookfield.

She complained of minor injuries and was treated at the scene by the Milwaukee Fire Department.

She had a PBT of .17. and was arrested for OWI 1st causing injury.

Kim faces up to one year in prison if convicted.