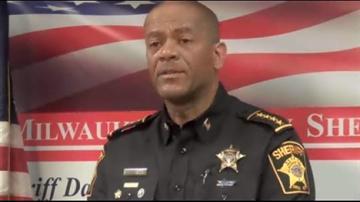 MILWAUKEE-Sheriff David Clarke issued the following statement Monday regarding a violent weekend in the Milwaukee where shootings claimed three lives.

\"This uptick in violence is not new.  It has been going on since 2010.  The only period of calm we  get is when winter sets in.  The reason crime and violence rise in the summer is NOT due to the hot weather, leading to short tempers, like so many think.  It rises in summer months because you have more human interaction due to more people being on the streets enjoying what little summer we have.  Any time you have human interaction you have the potential for conflict, thus we see more violence.

The overwhelming majority of black people living in Milwaukee are law-abiding people.  We’re dealing with a small segment that you have heard me refer to as the underclass.  This is a dysfunctional demographic with few social skills when it comes to dealing with conflict.  This segment doesn't’t socialize their kids, drug and alcohol abuse are rampant and the adults do not stay consistently in the workforce.  The underclass simply reacts to circumstances when it comes to conflict.  They settle disputes with violence, instead of choosing from more socially acceptable options.  If they see something they want, they take it with the use of force, whether it’s wallets, cars, or breaking into homes.

Ideas, along with a vision and a plan for reducing the growth of the underclass in Milwaukee, are the job of Mayor Barrett.   An increase in concentrated poverty, a lack of jobs, an unprepared workforce, school failure exhibited by recently released failing test scores - while furloughing and laying off law enforcement officers - are all risk factors for crime and violence.  All we get from the mayor are platitudes like, “we have to do more and we’ll keep on working.”  Wallpapering over the problem will not make it go away.  When not repeating his talking points, Barrett can be found blaming Governor Walker and the Republicans in the state legislature for his own failure to lead Milwaukee effectively.

Offering nothing more than platitudes is not an effective strategy in pulling Milwaukee from the brink of the abyss.  Listening to County Executive Abele is a mistake.  He knows nothing about crime strategies.  Until Mayor Barrett presents a plan to effectively deal with these pathologies, we should prepare ourselves to hear about more deadly violence because there is currently no strategy in place to counter it.

Here is a strategy for Barrett and Abele to implement immediately:

Long-term
·         Mass hiring of police officers and sheriff deputies.  Run recruit classes continually for the next several years.  MPD Academy can run up to 3 classes of 30-50 recruits at a time.  The MCSO can run two classes at a time of 30-50 recruits each. It takes about one year for a cop to become street-ready for a return on the investment.  This will not help this summer but will position each agency to stay ahead of crime and violence as we move forward.

·         Keep career criminals locked up for the longest period of time allowable by law until the crime and violence subsides permanently.  This will give law-abiding residents a respite from gunfire ravaging their neighborhoods.

·         How? Temporarily suspend all soft-on-crime social engineering programs by getting the District Attorney and Chief Judge of the circuit court in Milwaukee County to cease their current catch and release tactics that grease the revolving door of criminal justice - things like deferred prosecutions, early release, restorative justice, community corrections, the use of stayed sentences, alternatives to incarceration and other dangerous policies, until the crime and violence begin to fall drastically in Milwaukee.

This misguided approach to crime undoes the work of police on the street and does nothing more than return career criminals back to the street to commit more violence.

We have tried the soft approach and failed.  Now let’s try a more aggressive strategy.  We can make Milwaukee better, but not if we stay on this course.  Action is needed now!\"