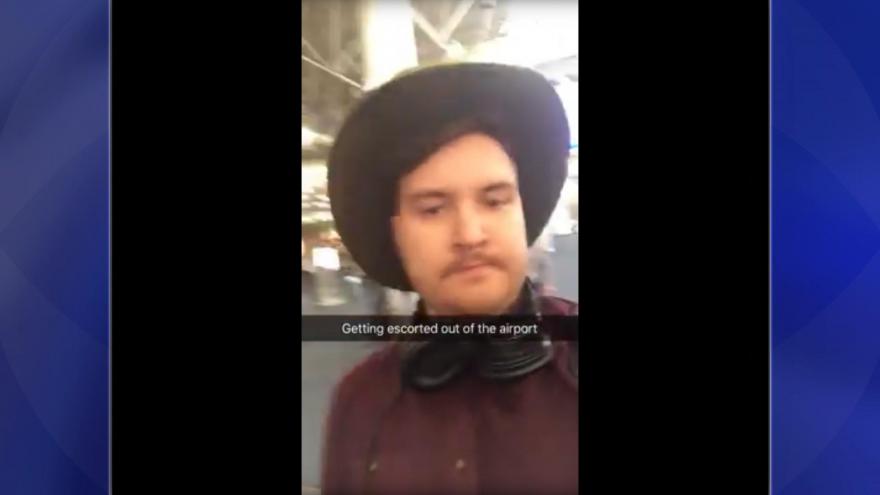 Sheriff Clarke responded to the claims Wednesday. His office issued the following statement: "Next time he or anyone else pulls this stunt on a plane they may get knocked out. The Sheriff said he does not have to wait for some goof to assault him. He reserves the reasonable right to pre-empt a possible assault."

A Milwaukee man claims Sheriff David Clarke ordered deputies to detain and question him, after the two exchanged words on a flight to Milwaukee.

Dan Black says he was boarding a flight from Dallas to Milwaukee, when he spotted a man that looked like Clarke decked out in Cowboys gear.

Black says he was surprised Clarke was wearing Cowboys gear, and shook his head before continuing toward his seat.

Black says he didn't think much more of the interaction, until he got off the plane in Milwaukee.

"I come out, and there's about 6 cops, Sheriff Clarke, and two dogs all standing there staring at me," he says. "Some of the cops came up to me, and I immediately know, here we go."

Black says those deputies took him to a private room, and questioned him for a few minutes.

"They asked who I am, what I was doing in Dallas, what are my views on Sheriff Clarke," he says. "The whole thing was so bizarre, I couldn't believe it at first."

Clarke says those deputies eventually escorted him out to his friend's vehicle, after admitting he had done nothing wrong.

Tuesday morning, he filed a complaint with Milwaukee County, claiming the Sheriff treated him like a criminal, and abused his power."

"It's beyond an apology," says Black. "This isn't really about me getting questioned, it's about him abusing his power to intimidate people, that's what it's about."