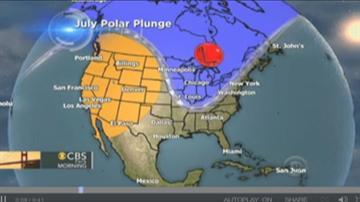 (CBS NEWS)--Forecasters say the U.S. could see some extreme weather next week - thanks to \"a giant trough in the jet stream\" expected to dip down from Canada, according to CBS Boston chief meteorologist Eric Fisher.

It's expected to happen starting Sunday in the Upper Midwest, then keep digging into Tuesday across the central and eastern portions of the nation.

What would that mean?

Very cool air for July taking over the middle and eastern U.S. with 60s and 70s for highs, lots of 40s and maybe even some 30s for lows near the Canada border.

And a lot of stormy weather - possibly severe - Monday and Tuesday in particular, with a heavy rain threat for the East that may pan out Tuesday and Wednesday with a flash flood risk.

\"This is a pattern very similar to what we saw all winter,\" Fisher said. \"It really hasn't gone anywhere since then - just a few interruptions here and there, but it keeps re-establishing itself.\"

The National Weather Service's Storm Prediction Center says, \"A substantial severe risk may develop across the Northeast Megalopolis on Tuesday. Over 60 million people (could have) at least a 30 percent probability of severe storms.\"

The West could see the opposite - higher-than-usual temperatures, especially in the Pacific Northwest, Fisher said.