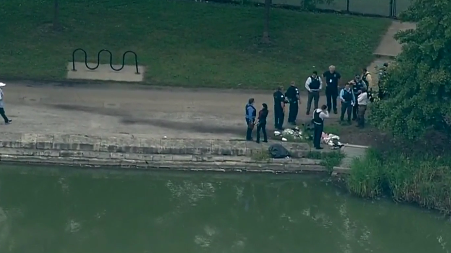 CHICAGO (CBS) — Police were conducting a death investigation, after a severed head and other body parts were found in a lagoon in a Southwest Side park on Friday.

Police said a contractor found the remains around 10 a.m. in the lagoon at McKinley Park, near Pershing Road and Damen Avenue.

Chicago Police Eddie Johnson says the head was that of an adult, probably an African American. More body parts were sent to the medical examiner’s office, he said.

Those body parts, the superintendent says, were found in the lagoon. The contractor, who made the gruesome discovery, was cleaning and maintaining the pond.

“It looks to be a fresh person, not decomposed,” community activist Andrew Holmes tells CBS 2’s Suzanne Le Mignot. “So, it might have been out here a day or just last night.”

While dive teams went into the lagoon to look for more remains, young mothers looked on in disbelief.

“It is scary because it is so close to home. You live a couple blocks down you got to worry about some nut bag running around,” Stephanie Fritz says.