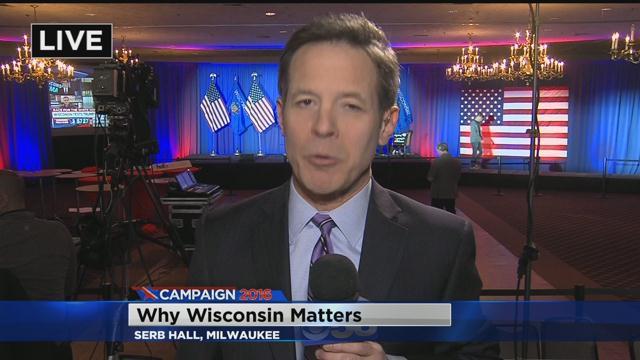 This photo is very similar to the vehicle that was stolen. It is a 2006 GMC Savannah G3500.

Four days after Ted Cruz received a standing ovation during a Republican event here at Serb Hall, the Texas Senator will return to this Milwaukee landmark for an election night watch party.

After a busy March, it's been two weeks since the last Republican Primary, and that has elevated Wisconsin's role in this nominating process.

The candidates have been courting voters from superior to Kenosha.

Meanwhile, the only snapshot of the race we've gotten since Arizona has been from the polls which show Cruz ahead of the frontrunner Donald Trump.

But primary polling can be tricky, especially in Wisconsin where voters can vote in either the Democratic or Republican primary, regardless if they're a member of either party.

The head of the Republican National Committee, Kenosha native Reince Priebus, told us this afternoon while tonight's outcome won't be a make or break election for any of the candidates it could determine who has momentum heading east to New York.

"There's two weeks before the next election in New York, so the impact of tonight, on both sides of the aisle...is that the winner and loser will have to contend with this media narrative.  And it's going to churn and churn and churn until April 19th which is when New York is doing their contest,” said Priebus.

While Trump has been making a number of appearances here in Milwaukee and in the republican stronghold of Waukesha County throughout the day, Ted Cruz has not been out campaigning ahead of tonight's party here and John Kasich is already focusing his attention on New York attending town halls tonight in New York City.