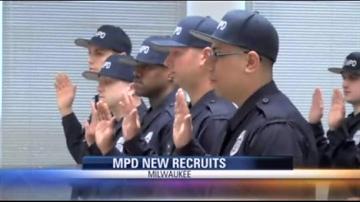 MILWAUKEE -- Before hitting the streets to serve and protect, Milwaukee's newest class of police recruits will take part in a rigorous training program.

The 35 men and women are the second class of recruits and Monday, started their first lesson learning the code of conduct.

Common Council President Michael Murphy presented the class in front of the recruit's family and friends.

For 25 weeks, they will be put to the test mentally and physically, recording nearly 1,000 hours of training.

A majority of the recruits are from the Milwaukee area and are familiar with the city's violent crime, but it is that culture that attracted Letitia Holloway to join the force.

She hopes six years of previous job experience will aid in her passion for change.

\"I had to use problem solving skills, critical thinking, such as being a correctional officer that's what I previously did,\" she said. \"It allowed me to work with people who are criminals, get into their minds and see exactly how they think. I would be able to bring that to this job.\"

The training is a part of the city's plan to hire 120 new officers this year. The second class of recruits is set to graduate in December.