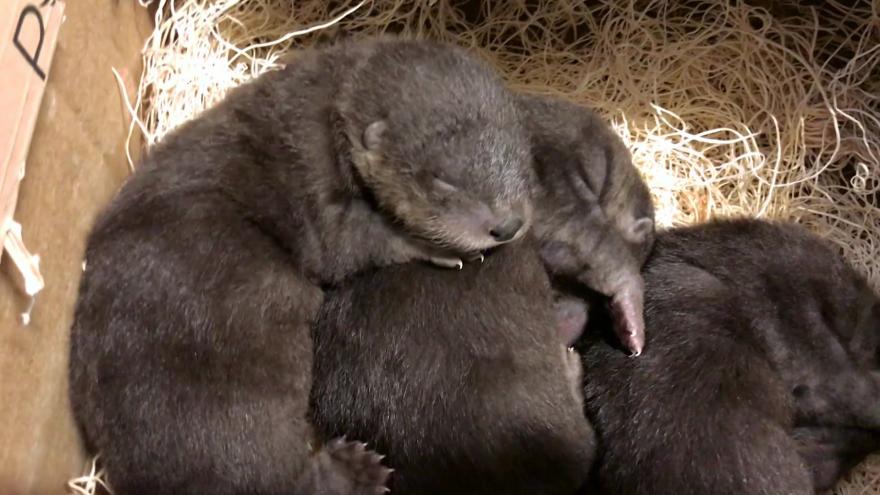 One of the zoo's female otters, 5-year-old Clover, and male otter, 5-year-old Larkey, are parents to three otter pups, born Feb. 26. Two male and one female pup are the first litter for Clover, and animal staff report parents and pups are doing well.

According to the zoo, as a first-time mom, Clover is “super protective” of her pups and usually keeps them hidden under her, according to her keepers. She doesn’t separate easily from the pups, sometimes even choosing to stay close to them instead of eating!

As a result, keepers work with Clover on her time, and if she chooses to separate from the pups, they use the opportunity for brief exams and weights. So far, keepers have been able to record weights twice per week. At about three weeks old, each of the pups weighed between 600-700 grams.

You may recall the zoo's other female otter, Shamrock, gave birth to four pups on Feb. 7. Larkey is father to both litters.

By comparison, the zoo says Shamrock’s pups now weigh over 1,000 grams, and they’re nursing and keeping mom busy (and hungry)!
Animal care staff report Clover’s pups are nursing and right on schedule with weights and development. They gain weight each time they’re weighed.

The pups should be fully weaned at 3-4 months. In 42-56 days, they’ll begin eating fish that keepers will “mash” for them, or fish that Clover drops from her mouth! North American river otter pups are born with their eyes closed, and they’ll remain closed for about 1 month.

As the pups continue to grow and mature, they’ll begin to “squirm” and “belly crawl” in the holding areas. It’s expected the pups will learn how to swim from mom, at about 1 ½ months old. They will walk first, and then learn how to swim in the indoor pool.

The pups marked their 1-month birthday March 26, and mom and the pups, who have yet to be named, will remain off-exhibit for the next few months.