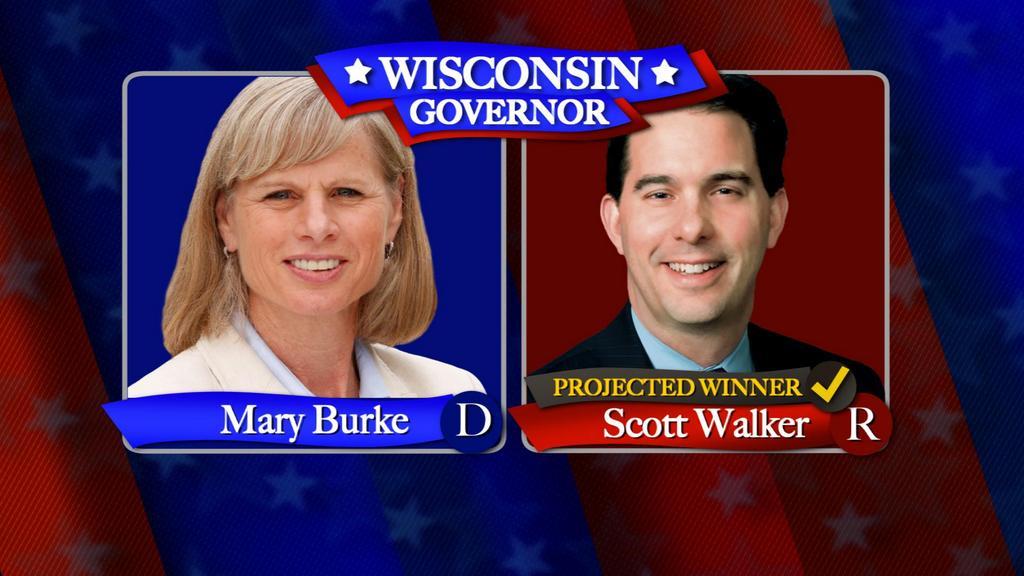 It is the third time, including a recall, that he has won the Governor's seat.

The victory is another achievement that Walker's supporters can point to as he considers whether to seek the Republican nomination for President in 2016.

Walker struck conciliatory tone when thanking his opponent Mary Burke. He said a shared photo op between the two the night before showed that there was a chance for one time foes to work together, noting that before political affiliations we are all Wisconsinites.

Still, Walker was firm in his policies of creating opportunities for individual achievement.

He told a raucous crowd at State Fair Park Tuesday night that when he was growing up in Walworth County, \"Nobody said I want to grow up to be dependent on the government.\"

Governor Walker thanked those who voted for him and said he hoped to earn the support and respect of those that didn't over the next four years.

He also talked about fighting Washington, D.C. based special interest that he has long said polluted the campaign.

\"I'm an optimist,\" Governor Walker said. \"I believed all along that if we got a positive message out people would, in the end, people wanted to be for something, not against something. Look what happened tonight.\"

The Republican Party of Wisconsin released the following statement in response to Governor Walker's victory:

“Tonight, Wisconsin voters rewarded Scott Walker for his bold, common-sense reforms and strong leadership that have put Wisconsin back on the right track. Over the last four years, Governor Walker has made our state a better place to live, work, and raise our families through his pro-growth agenda – and tonight's strong victory ensures that we will continue the Wisconsin Comeback. Tonight's win is a victory for every Wisconsinite, and we look forward to Governor Walker's second term and the prosperity that it will bring to the Badger State.”

While doing interviews during a recent stump for Walker Priebus said the Walker election remained a top priority for the GOP.

\"Walker represents not just the future of Wisconsin,\" he said to the Huffington Post, \"but the future of our party and the future of people that make promises and keep promises, and whether they can be rewarded for doing those things.”