Schools closed after officer killed; search on for 3 suspects 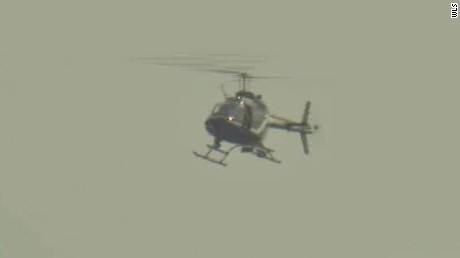 A large-scale search for three suspects in the fatal shooting of an Illinois police officer continued Tuesday into the night.

Officers in heavy gear, with K-9 partners and others on horseback, kept looking for the men police said shot Lt. Joe Gliniewicz earlier in the day.

The shooting happened about 10 minutes before 8 a.m., after Gliniewicz sent word over his radio that he was pursuing three suspects on foot, Lake County Sheriff's Sgt. Christopher Covelli said.

Radio communication dropped off and backup officers were sent. They found the officer with a gunshot wound.

A massive search ensued with authorities combing the woods and marshy areas around Fox Lake, a community of about 60,000 people in Lake County, about 60 miles north of Chicago. They also were going house to house.

Gliniewicz, a married father of four who was known as \"G.I. Joe,\" had been a police officer for more than 30 years.

\"He loved his community and loved his job, and he will be very sorely missed in this community,\" said Catherine \"Kay\" Starostovic, Grant Township supervisor.The hunt for the suspects -- described by Covelli as two white men and one black man -- put at least four schools on lockdown and left people barricaded in their homes.

Several school districts, including Fox Lake, Gavin and Big Hollow, will be closed for Wednesday due to the ongoing manhunt, according to the Grant Community High School's website.

Helicopters aided the search. The FBI, U.S. Marshals and agents from the Bureau of Alcohol, Tobacco, Firearms and Explosives were assisting.