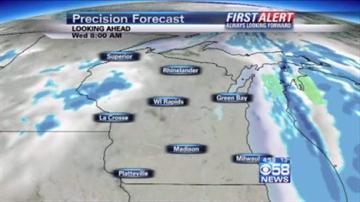 Clouds arrive Christmas eve and are quickly followed by light snow.  The snow tapers off by early Christmas morning with accumulations of 1-3\".  Lows are reached this evening in the single digits and rise by morning into the teens.  Winds are gusty from the west southwest at 15 to 25 mph.

Christmas:  Skies remain cloudy to mostly cloudy with another chance of snow in the afternoon.  Expect an additional dusting to an inch of accumulation.  High temps reach the mid to upper 20's with a gusty west to southwest wind of 15 to 25 mph.