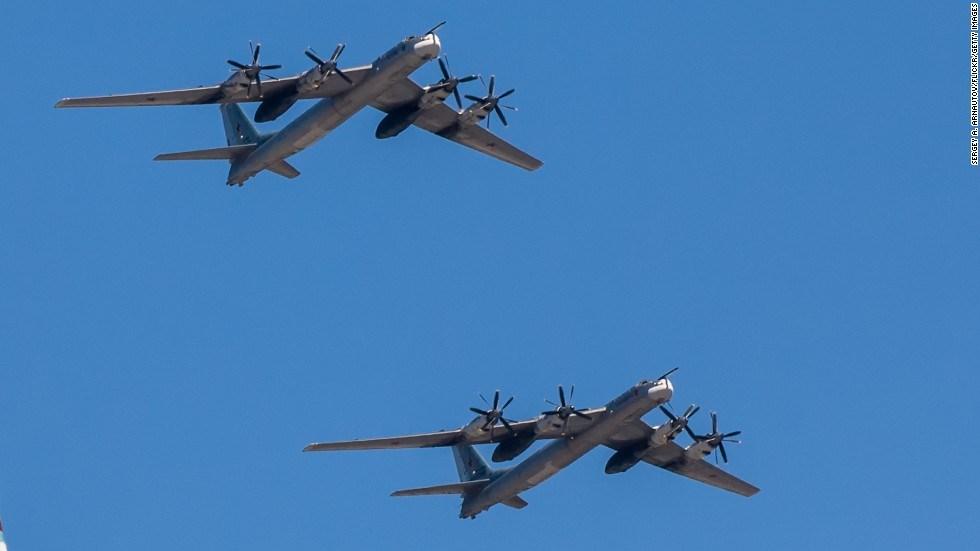 (CNN)Two Russian bombers intercepted by U.S. fighter jets off the California coast on July Fourth could be seen as having raised a metaphorical middle finger to the United States.

\"Good morning, American pilots. We are here to greet you on your Fourth of July Independence Day,\" they said, according to the North American Aerospace Defense Command.

U.S. fighters also intercepted two other Russian Tu-95 bombers the same day off the southern coast of Alaska. In both instances, American fighter jets flew up to intercept the Russian bombers, and the aircraft turned away.

CNN looks at the significance of the Russians' actions.

So why is Russia doing this?

According to Nick de Larrinaga, Europe editor for IHS Jane's Defence Weekly, it's all part of Russian President Vladimir Putin's efforts to reassert his country's presence on the international stage.

\"His view is that Russia's political standing and the respect accorded to it have fallen away very much since the end of the Cold War,\" he said.

The current muscle flexing is all part of Putin's push to make sure Russia gets the respect it deserves, de Larrinaga said, and demonstrate that it's \"still a global military power and a force to be reckoned with.\"

For U.S. Rep. Adam Kinzinger, an Air Force veteran, the Tu-95 bombers' visit should be seen as \"an act of aggression\" intended to convey the idea of Russian might.

\"If you ever have any doubt whether the Cold War is back on, I mean these are the kind of maneuvers that show that it is,\" Kinzinger told CNN.

\"I think there has been a re-establishment, probably not to the intensity it was in the '80s, but a re-establishment of, in essence, kind of Cold War principles, where, you know, at that time, it was all a show of force from both sides.\"

Kinzinger, an Illinois Republican who previously sat on the House Foreign Affairs Committee, compared Putin to a school bully, saying, \"Sometimes a small kid in class is the biggest bully. And that's who he is.\"

What does Russia stand to gain?

Not a great deal -- except perhaps a boost to its ego and the opportunity to keep other nations' armed forces on their toes.

The combat air patrols are more about the international sphere than Putin's audience at home, where they are unlikely to get much media coverage, de Larrinaga said.

However, the impudence of the July Fourth greeting might have sparked some interest in Russia, where Putin has fostered the growth of nationalistic pride. The intercept came on the same day that Putin sent best wishes to President Barack Obama for the July Fourth holiday.

Since it's unusual for Russian crews to communicate with either any intercepting aircraft, or air traffic controllers, de Larrinaga said, the pilots' rather less official greeting -- sent via an emergency aircraft communication channel -- does seem to send a particular message. \"Normally they maintain radio silence,\" he said.

Kinzinger said he believes Putin is seeking to test the West's will with such sorties, as he figures out how far he can push before provoking a response.

\"That's why it's important for us to stand up now and make it very clear that we're not going to be bullied,\" he said.

What are the risks?

The Russian aircraft are in international airspace, where they are perfectly entitled to be flying, de Larrinaga said. But there are certain risks involved.

For one, there have been complaints that the Russian aircraft don't turn on their transponders -- a bone of contention particularly over Europe, where airspace is more congested, since it raises the risk of a potential collision with civilian air traffic.

There's also a danger of collision with the military aircraft sent to intercept the Russians.

\"Any time you have military aircraft of two different nations coming into close proximity to each other when they are not communicating, it does raise the prospects of accidents happening,\" de Larrinaga said.

Both the Russians and other nations sending intercepting aircraft have previously complained of the other side coming dangerously close, he said.

And while the pilots are highly skilled, making a collision unlikely, it can happen.

In 2001, a U.S. Navy surveillance aircraft and a Chinese fighter collided during just such an interception over Hainan Island in the South China Sea. While the damaged U.S. plane managed to make an emergency landing, the Chinese aircraft crashed and its pilot was killed. The Chinese blamed the United States, and the stranded U.S. crew wasn't allowed to leave for more than a week.

Also, although vast sums of money are being spent on the Russian military, it still lags behind Western powers in terms of capability and equipment, de Larrinaga said. The Russian air force is currently pushing its aircraft -- many of them aging -- very hard, with the result that it has lost quite a few lately, he said, including a Tu-95 that crashed recently in Russia.

Kinzinger warns of the broader risk that an unpredictable Russia \"could take one wrong move\" -- perhaps by calculating it can move into Estonia, Latvia or Lithuania without provoking a NATO response -- \"and that can lead to, you know, at best, a regional war, but potentially a world war scenario, as NATO is forced to defend its own territory.\"

Are the Russian sorties a threat to the United States?

A NORAD spokesman declined to describe the July Fourth incident as a threat but said it was \"potentially destabilizing,\" because it was unannounced and the bombers in question are nuclear-capable.

In neither case did the Russian planes enter U.S. airspace, which extends 12 nautical miles from American coastlines, officials said. The U.S. fighters tracked them until they turned around.

While the intercepts were routine from a military point of view, the U.S. official said, the Pentagon sees them as Putin \"sending a message\" to the United States on Independence Day.

The Russian aircraft would have been detected and tracked probably even while still over Russian airspace, de Larrinaga said, so the U.S. military would have been well on top of their arrival -- and interception -- near U.S. airspace.

\"There shouldn't have been a military risk from that point of view,\" he said, \"although there is also a certain element of military discomfort that you might have a nuclear-armed bomber flying off your airspace.\"

Is this a new phenomenon?

During the Cold War, both Russia and the United States used to conduct long-range air patrols close to each other's airspace, but these dropped off as tensions eased.

\"Over the last few years and particularly this year and last year, with the start of the Ukraine crisis, Russia has picked up the number of sorties,\" he said.

Japan reported 324 such aircraft in the first six months of last year, he said, which was a significant increase over the previous year. NATO also has seen an increase in Russian aerial activity in Europe -- around the Baltics in particular -- and is intercepting Russian aircraft \"almost on a daily basis,\" de Larrinaga said. Britain has also scrambled jets this year to intercept Russian bombers flying near UK airspace.

Russian military planes have been encountered near U.S. airspace a number of times before this month's incident.

On June 4, 2014, U.S. fighter jets intercepted Russian bombers off Alaska and California following a string of aerial encounters over the Pacific.

How are the United States and Russia getting along right now?

There's no question that tensions are as high as at any time since the end of Cold War.

\"Russia presents the greatest threat to our national security,\" Gen. Joseph Dunford told the Senate Armed Services committee this month during his confirmation hearing to be the next Chairman of the Joint Chiefs of Staff.

\"If you want to talk about a nation that could pose an existential threat to the United States, I would have to point to Russia,\" Dunford said. \"And if you look at their behavior, it's nothing short of alarming.\"

In general, Russian military activity has increased since March 2014, when Western countries objected to its annexation of the Ukraine's Crimea region as well as to Russia's alleged support for separatists in eastern Ukraine.

In May, for example, Russia annoyed Western officials by deploying 12,000 troops and numerous aircraft and weapons in a surprise military exercise in the country's northwest, a show of strength that appeared to be a response to a long-planned -- and long-announced -- European military exercise led by Norway.

And in June, Putin announced the addition of 40 intercontinental ballistic missiles to Russia's nuclear arsenal.