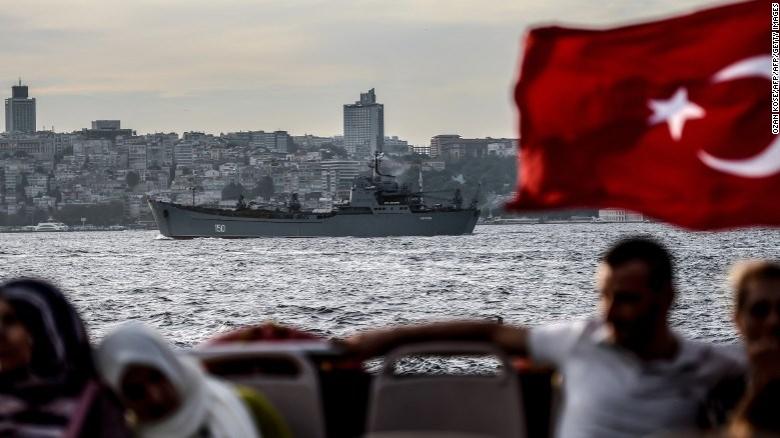 (CNN)A Russian warship has fired warning shots at a Turkish boat as the two vessels threatened to collide.

The incident occurred on Sunday 22 kilometers (13 miles) north of the Greek island of Limnos in the Aegean Sea, according to a statement from the Russian Defense Ministry.

Relations between Russia and Turkey have been tense since a Russian jet operating in Syria was shot down by the Turkish military on November 24, killing one pilot. Another Russian soldier died during a rescue mission that retrieved the surviving crew member.Speaking to Turkish media Sunday, the country's Foreign Minister Mevlut Cavusoglu said more information was needed from the crew aboard the Turkish fishing boat before a proper response could be issued.

Earlier this month, a Russian serviceman was filmed on the deck of a naval ship holding what appeared to be a rocket launcher as a Russian warship passed through Istanbul. A treaty between the countries allows Russia's Black Sea fleet access to the Aegean Sea by way of the Bosphorus, which bisects the Turkish city."For a Russian soldier to display a rocket launcher or something similar while passing on a Russian warship is a provocation," Cavusoglu told reporters, according to Turkey's Hurriyet newspaper.

"If we perceive a threatening situation, we will give the necessary response."Russian President Vladimir Putin has accused Turkey of shooting down the plane to protect a secret oil trade with the terrorist group ISIS.

Turkish President Recep Tayyip Erdogan said the plane violated Turkish airspace. He said he'll resign if Moscow can prove its claim, and that Putin should step down if he cannot.

Moscow struck back economically after the plane was shot down, banning the import of some Turkish goods, imposing restrictions on travel and planning to stop some Turkish companies doing business in Russia, CNNMoney reported.

Speaking earlier this month, U.S. State Department spokeswoman Elizabeth Trudeau appeared to take Turkey's side in the dispute, saying that the information available indicated the plane was in Turkish airspace when it was downed.