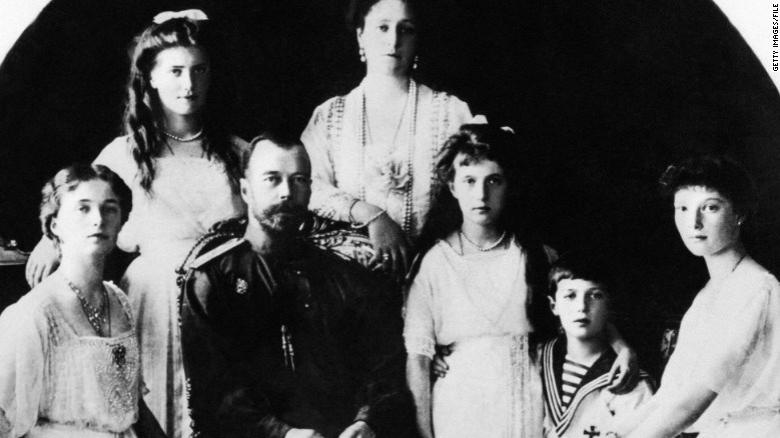 (CNN) Russian investigators say they have exhumed the remains of Czar Nicholas II and his wife, Alexandra, in a bid to identify bone fragments that may belong to two of their children.

Seven members of the Romanov family were killed by Bolshevik revolutionaries in 1918 in the Russian city of Yekaterinburg, a year after they were ousted from power during the Russian Revolution.

The remains of the royal couple, along with three of their five children, were found in 1991 in a mass grave. After being identified with DNA analysis, they were reburied in St. Petersburg on July 17, 1998, the 80th anniversary of their deaths.

The Russian Orthodox Church made them saints in 2000.

But the whereabouts of the czar's two other children -- Crown Prince Alexei, 13, and Grand Duchess Maria, 19 -- remained a mystery until 2007, when their suspected remains, a few bone fragments, were unearthed at a separate grave site in the Urals region.

According to the Russian Investigative Committee, "expert studies and other materials of the criminal case" established that the remains were indeed those of Alexei and Maria.

But in July this year, at the request of the Russian Orthodox Church, further identification tests were ordered, according to officials.

It is widely expected the two children will also be canonized, but church officials say they want greater certainty that the remains are authentic.

As well as exhuming the bodies of Nicholas and Alexandra in St. Petersburg, the investigative committee says tissue samples from Romanov family members buried in Jerusalem have also been obtained, as well as blood samples from the czar's grandfather, Alexander II, who was assassinated in a bomb attack in 1881.

The Tass news agency quoted a lawyer for a surviving Romanov relative, Grand Duchess Maria Vladimirovna, as saying she supports the new investigation.

"The Grand Duchess hopes that the examination of the Yekaterinburg remains will be scientific. The truth must be established in this case, with an answer to the main question: whose are these remains?" attorney German Lukyanov told Tass.

But the murder of the czar's family is no longer the politically charged issue it was when the Soviet system collapsed.

"A full stop should be put on the issue in the 1990s," said one woman, who identified herself as Zarema, as she hurried to work in Moscow.

"I do not think it is worthwhile doing more investigations," said another woman.

"From the religious viewpoint, it is better to leave everything in peace," she added.