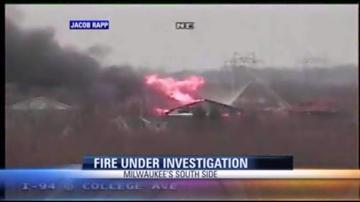 MILWAUKEE - A local salvage yard is back in business just 24 hours after a three-alarm fire on its property.

The Milwaukee Police Department's arson investigations unit is working to determine the exact cause of the blaze at Roz Auto Salvage.

The team works with the fire department's investigations unit.

So, it is not an indication the massive fire that destroyed the storage building was set on purpose.

In fact, fire officials said the preliminary investigation shows it is not arson.

The dangerous chemicals inside the storage building at the salvage yard created a series of explosions Thursday afternoon.

Nearby homes shook and thick, black smoke billowed into the air.

Assistant Fire Chief Dan Lipski said it is unknown what specific items were stored in the building and how much.

He says OSHA has regulations for that, but he does not know if those rules were violated.

Lipski said their focus as a fire department is to make an educated guess on the best way to attack the fire safely, based on what type of fire they're responding.

No one was hurt in the incident and nearby businesses were saved.

Officials say the initial call was for a leak coming from a gas or propane tank.

Roz Auto Salvage's owner tells CBS 58 he believes a propane tank did indeed cause the massive fire.
Share this article: