Roy Moore claims kneeling during the national anthem is illegal 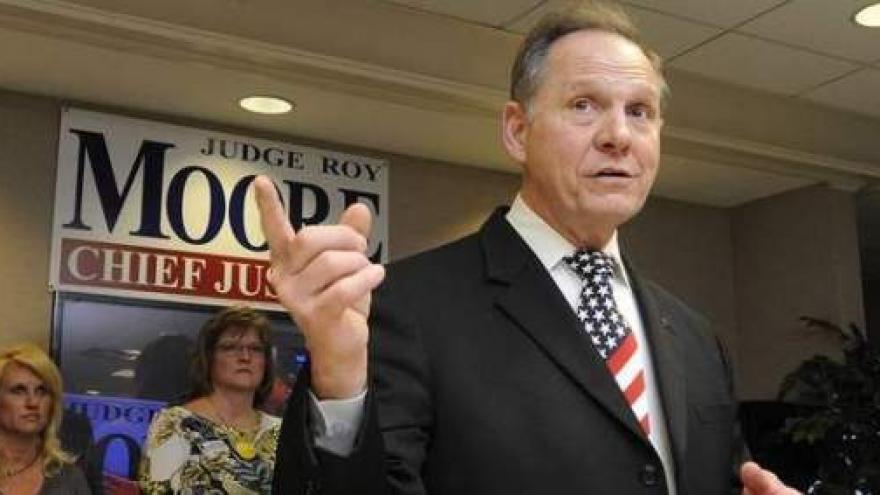 Moore, in an interview with TIME.com published Wednesday, made the case that NFL players — and conceivably, anyone else — who fails to stand and put their hands over their hearts when the "Star-Spangled Banner" is played is not only unpatriotic, but a law breaker.

"It's against the law, you know that?" Moore told the magazine. "It was a act of Congress that every man stand and put their hand over their heart. That's the law."

Moore told TIME that his position is about respect for the law and for fallen soldiers.

"If they didn't have it in there, it would just be tradition," Moore later added. "But this is law. If we disobey this, what else are we going to disobey?"

But, is it really illegal?

Moore could be referring to a section of U.S. Code stipulating that during the national anthem, members of the military should salute, and "all other persons present should face the flag and stand at attention with their right hand over the heart, and men not in uniform, if applicable, should remove their headdress with their right hand and hold it at the left shoulder, the hand being over the heart."

That section does not outline a punishment for those who do not stand, however.

The key word in that section of code is "should," according to Eugene Volokh, a law professor and First Amendment expert at the UCLA School of Law.

Generally speaking, Volokh said, legal precedent holds that "should" indicates a recommended, but not required, course of action, unlike the obligatory connotation of the word "shall."

"But if it did aim at being legally binding, the First Amendment would prevent it from being enforced," Volokh added. "The court held in West Va. Bd. of Ed. v. Barnette (1943), held that even public school students can't be required to salute the flag; likewise, people can't be required to stand at attention, put their hand over the heart, or remove their hats during the national anthem."

Catherine Ross, a law professor at The George Washington University Law School who specializes in constitutional law, had a simple answer when asked if there's any valid interpretation that it's illegal to kneel for the national anthem: "None at all," Ross told CBS News.

"When something is mandatory the legal term is 'shall,' so you know immediately it's not enforceable no penalty," Ross said. "It's not in the criminal section. There's no remedy suggested."

Moore, the ultra-conservative former judge who was first forced out of the Alabama Supreme Court for refusing to obey a court order to remove a monument of the Ten Commandments, and was forced out of the court a second time for directing judges to enforce a ban on same-sex marriages that was ruled unconstitutional, continued to push the culture war begun by President Trump. The NFL national anthem controversy started when Mr. Trump was holding a rally for Moore's primary opponent, Sen. Luther Strange, in Alabama last month.

"Wouldn't you love to see one of these NFL owners, when somebody disrespects our flag, to say, 'Get that son of a bitch off the field right now. Out! He's fired. He's fired!'" Mr. Trump said at the rally.

Moore defeated Strange, but the NFL controversy only intensified. Since then. Mr. Trump has called on NFL owners to fire players who refuse to stand for the "Star-Spangled Banner."

In a different environment, one in which the White House clearly respected the First Amendment, Moore's comments might not mean much.

"I think in a different environment I might be able to dismiss it and just say it's marginalized," Ross said.

"But our representatives in Congress, our senators, also take an oath of office, to uphold the Constitution," she added.

A Fox News poll released Tuesday shows Moore could be in for a tough race, despite Alabama's deep-red ties. The poll found Moore is tied with his Democratic opponent, Doug Jones, ahead of the December general election.